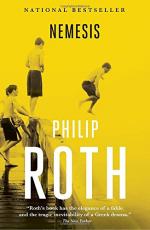 Philip Roth
This Study Guide consists of approximately 35 pages of chapter summaries, quotes, character analysis, themes, and more - everything you need to sharpen your knowledge of Nemesis.

This detailed literature summary also contains Quotes and a Free Quiz on Nemesis by Philip Roth.

NOTE: The following version of this book was used to create this study guide: Roth, Philip. Nemesis. Houghton Mifflin Harcourt, 2010.

Nemesis opens at the beginning of the summer of 1944 in Newark, New Jersey. 23-year-old Eugene “Bucky” Cantor is the playground director for a summer fitness program at the Chancellor Avenue School in the predominantly Jewish Weequahic neighborhood of Newark. An outbreak of polio has begun to spread through the city, with far more cases of the disease occurring than usual. Cantor does his best to protect the kids under his supervision and to keep the parents from worrying too much about the disease. However, two of the boys under Cantor’s supervision eventually contract polio and must be hospitalized. Both of the boys are soon killed by the disease, much to the devastation of Cantor and the community. When Cantor attends the funeral of one of the boys, he feels angry and bitter, especially towards God.

Polio continues to spread throughout Newark, and several more kids under Cantor’s supervision contract the disease. Cantor’s long-term girlfriend, Marcia Steinberg, is working at a summer camp in the Pocono Mountains, and over the phone, she tells Cantor that there is a job at the camp that he could accept. Cantor is unsure about this idea. Cantor talks to Marcia’s father about the polio outbreak, and Marcia’s father speaks very reassuringly. Cantor asks for permission to propose marriage to Marcia, and Marcia’s father gladly gives his approval. When Cantor next speaks to Marcia on the phone, he proposes marriage, and she gladly accepts. Cantor also says that he will take the job at the camp. Cantor tells his employer at the Chancellor Avenue School that he will be leaving at the end of the week.

Cantor goes to the camp, which is in the Pocono Mountains and is called Camp Indian Hill. It is owned and operated by a man named Bill Blomback, who idolizes Native American ideas and customs. Cantor is excited to be at the camp, where his fiancée is also working, and he is excited to be so distantly removed from the hotbed of polio that is Newark. However, he feels guilty for leaving his previous job; he sees his departure as an abandonment of the children whom he had supervised. Regardless of his guilt, Cantor quickly becomes accustomed to the pleasure of life at the camp. He befriends a 17-year-old camper named Donald Kaplow, who is interested in learning diving techniques from Cantor. Cantor and Marcia occasionally canoe to a secluded island on the lake at night. There, they have sex and enjoy one another’s company. However, Cantor’s guilt still nags at him somewhat, and this shows during an argument he has with Marcia; Cantor angrily says that God is cruel for inflicting polio on innocent children.

Eventually, Donald Kaplow begins to feel ill, and he is rushed to a nearby hospital. There, doctors confirm that he has polio. Cantor is horrified and immediately believes that he must have unwittingly carried the polio to the camp. The camp is shut down as more campers begin to contract the disease, and Cantor asks a doctor if he could have carried the disease for a week without realizing it. The doctor says that it is unlikely but that they should have Cantor tested for the disease. The test is positive, and 48 hours later, Cantor begins to exhibit symptoms. Over the following months, Cantor is treated, and although polio does not kill him, it eliminates all function in one of his legs, and it eliminates most of the function in one of his arms. Cantor gives up his dream of being a physical education teacher, and he finds a desk job at the local post office.

One day, in 1971, Cantor happens to encounter Arnie Mesnikoff, who was one of Cantor’s students at the Chancellor Avenue School in the summer of 1944. Cantor and Arnie begin to have lunch regularly. Arnie also contracted polio that summer, and although it affected his legs, he is able to walk with a crutch and leg braces. During their lunches, Cantor tells Arnie his story. He says that he ended his engagement to Marcia after the polio crippled him. He says that his motivation was to spare Marcia the pain of being married to a crippled man, although Marcia said that she still loved Cantor and wanted to marry him.

More summaries and resources for teaching or studying Nemesis.