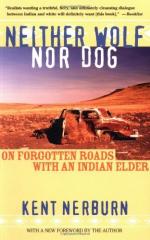 Neither Wolf nor Dog: On Forgotten Roads with an Indian Elder Setting & Symbolism

Kent Nerburn
This Study Guide consists of approximately 37 pages of chapter summaries, quotes, character analysis, themes, and more - everything you need to sharpen your knowledge of Neither Wolf nor Dog.

Buffalo rock historical marker in North Dakota is a three-sided historical marker that enclosed a large boulder with a plaque on it. The huge rock reminded the author of Lakota Indian people and their traditions. Nerburn claims he conceived this book idea on a hot August day's motorcycle ride across North Dakota when he saw this historical marker. The rock was shaped like a buffalo and the fenced-in site was a metaphor for the plight of the Lakota. The rock represented a living spiritual presence that stimulated Nerburn's vow to bridge the gap between white people and the Lakota Indians that he grew to know and love

Red Lake people are the people that Nerburn spent time with when he wrote his Red Road book series. The Red Road books suggested to Dan its author Nerburn would be a good writer for his...

Neither Wolf nor Dog: On Forgotten Roads with an Indian Elder from BookRags. (c)2023 BookRags, Inc. All rights reserved.