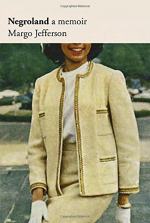 Margo Jefferson was born into a family that was middle-class by American standards but upper-class by Negro standards. Her father was a doctor of pediatric medicine and her mother was a social worker, but her main role was taking care of their home and family with a special emphasis on caring for Margo and her older sister, Denise.

Jefferson was a vivacious child who learned early on that it was acceptable to show off only in the correct circumstances. Jefferson, Denise, and their peers were held to a high set of standards. They were taught that white people were constantly evaluating the Negroes' actions in the hope of tearing down the race as a whole. They were also taught they had a huge responsibility on that front, and that their actions could literally harm the entire race.

Jefferson and Denise attended a private school with a majority white student base and only a few select Negro students. She never developed deep friendships but always had friends and did well when she applied herself. Jefferson excelled academically and was talented in drama and music, but always felt that she was not as pretty as she should be. She and her peers were taught all the ways they could enhance their beauty. They rigorously avoided “ashy” skin with the use of cosmetic lotions. They also sat still for their mother to straighten their hair into conformity, which meant it was to be straight and lustrous. Jefferson had eye problems, which meant she wore glasses throughout her childhood, and she felt they put her at a greater disadvantage.

Jefferson always struggled with racial slurs and did not understand the subtler ones. Her mother was furious when she discovered that Jefferson's class had learned a song that included the word “darkie.” Her grandmother interrupted when Jefferson, following a girl from the neighborhood, was pretending to be a monkey. When those situations occurred, Jefferson felt that she would never understand the racial slurs and felt like a failure because of her lack of understanding. By college, she had become more adept at maneuvering through the racial questions, but still faced challenges, such as when she was cast to play a maid. In that case, she had to weigh the stereotypical black woman as a maid against her desire to take the stage.

Jefferson was in college when the Civil Rights Movement was in full swing. She was angry at some parts of her life, including that much of her childhood was spent learning how to mimic white people. Her language began to change during that period. She continued to use the word Negro to refer to her childhood, but began to use black to describe herself as an adult. She also used African American in some specific circumstances. She had launched a successful career in journalism by the time women's rights were at the forefront of the political and social scene. She observed that the movement was dominated by whites.

As an adult, Jefferson saw black women gain rights that they had never had before. As a child, she was taught that a Negro woman was to be a strong person who never gave in to the tragedies of life. As an adult, she found that black women suddenly had the right to admit to being depressed. For Jefferson, that opened a fascination with death and she even practiced writing suicide notes.

As Jefferson brings her story to a close, she talks about her continuing desire to “dismantle” herself. She considers whether she has done anything to make the world a better place and whether she has become a happy adult. She concludes that she might not have been perfect, but that it does not really matter.