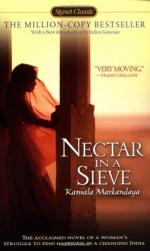 Kamala Purnaiya Taylor
This Study Guide consists of approximately 29 pages of chapter summaries, quotes, character analysis, themes, and more - everything you need to sharpen your knowledge of Nectar in a Sieve.

Nectar in a Sieve Summary & Study Guide includes comprehensive information and analysis to help you understand the book. This study guide contains the following sections:

This detailed literature summary also contains Topics for Discussion on Nectar in a Sieve by Kamala Purnaiya Taylor.

The story follows the life of the narrator and heroine, Rukmani, who grows and matures through the clashing of the east and the west in post-independence India. Her tale begins when she is married at the age of twelve to a poor tenant farmer. The youngest of four daughters, Rukmani is left without a large dowry, and is therefore given in marriage to what society considered a man “beneath” her. However, despite having little and not owning his own land, her husband, Nathan, is very kind and loving towards her. Rukmani considers herself lucky to have been blessed with a kind and loving husband.

Embracing her new life as the wife of a farmer, Rukmani’s early days are remembered as happy and plentiful. The women of the village patiently teach her the ways of the land—how to grow vegetables, milk the goat, churn milk into butter and how to mull rice. While Rukmani and her husband want for little in the early days of their marriage, the first tragedy, and test comes when Rukmani bears a baby girl, and is unable to conceive again for the next seven years. Desperate to provide her husband with a male heir, Rukmani finally secretly visits a western doctor, Kenny, who had helped her mother in her final days. Kenny becomes a prominent figure in Rukmani’s life after she gives birth to five sons following a visit to Kenny for his assistance.

However, with each new mouth to feed, there is less and less for the family to put away and save towards both their only daughter’s dowry and towards buying the land upon which they live and depend. Rukmani learns to be creative in having enough to fill everyone’s stomach; however, monsoons, droughts and them building a large tannery serve to send the family into starvation and hardship after hardship.

Together with her husband, Rukmani endures a seemingly endless series of tragedies, which begin, as she states, when the tannery is built and the small village in which she lives is transformed into a bustling, dirty, immoral metropolis. Poverty, starvation, and death ensue as the worlds of the east and west collide in this once rural town. Rukmani watches as the crops, the livelihood and food source for her family, are destroyed by monsoons and drought, leaving them unable to eat or pay rent to the landlord. Her two eldest sons, having become fed up with unfair wages and poor treatment at the tannery, decide to leave and seek work hundreds of miles away. Her daughter Ira, married at age 14 for five years, is returned home to the family after being unable to conceive a child. Finally driven to desperation to try to save her youngest brother from starvation, Ira becomes a prostitute, only to finally conceive and give birth to an albino child. A former neighbor, Kunthi, uses the only secrets Nathan and Rukmani have from each other to blackmail them both into giving her all the grain they have to feed their family. The youngest son dies of starvation. Another son is killed in a misunderstanding at the tannery. And finally, after skating by year after year, the land upon which they have lived and farmed for thirty years is sold to the tannery, and lost and confused Rukmani and her husband head for a strange city to seek their third born son to take them into his house.

After traveling nearly 100 miles by bullock cart, Rukmani and Nathan arrive in the large city where their third born son moved several years before and married. Carrying very few possessions and still possessing a trusting and simple-minded attitude, they are quickly robbed of what little money and material items they have as they wander through the streets of unfamiliar territory, in search of a son, no one seems to know. After a full day of searching, and a sleepless night in a temple surrounded by the homeless and less fortunate, Rukmani and her aging husband find help from a young boy, Puli, who leads them to the house where their son had gone to work years earlier. They are greeted with the news that their son had left to seek a higher wage elsewhere nearly three years ago. The owner of the house, a female doctor to whom Nathan and Rukmani have a hard time relating, shows them kindness after learning they are familiar with Kenny, the doctor whose help Rukmani sought to conceive her sons, offers them their first meal that day and kindly points them in the direction of the house to which their son went.

Finally reaching a large house employing many servants, Rukmani and Nathan are led to their son’s hut, where they meet for the first time his young wife. Almost immediately, their hopes of finding a home with their son and his wife are destroyed. The source of the icy attitude of their daughter-in-law is soon laid out in the open as she reveals their son left her two and half years before and she had no idea where he went. Working as a servant in the house to feed herself and her two small children, Rukmani realizes quickly that there is no place for herself and her husband with their daughter in law. As they take their leave of her, the reality of their situation becomes clear. They are homeless, penniless and without any friends or relations in a large and unfamiliar city. Not knowing what else to do, and wishing they had been better about keeping in touch with their son, they return to the only place they do know, the temple where they are at least guaranteed one meal a day and a place to sleep.

Not the types to lose hope or give up, Rukmani and Nathan quickly devise a plan to earn the money they need to return to their village and their son and daughter. Rukmani, who was taught to read and write by her father, begins writing and reading letters for a small fee and earns enough money to save a little and add some more sustenance to the meager meals at the temple. However, accumulating the money to return home is slow going. Then one day, their luck turns for the first time in many months. Puli, the young boy who showed them the way to the doctor’s house where they believed their son to be, reappears to collect payment for his kindness. Attaching himself to them as a kind of son, under the pretense of collecting what is due to him, Puli helps Rukmani start earning more money by cutting stone in the quarries. By this time, Nathan’s health has deteriorated substantially. Having lived through months of starvation, homelessness, and loss, he finally crosses over into the next world with Rukmani by his side. Not knowing what else to do, Rukmani takes the money Puli had helped them to earn and save, and returns to her home village, bringing Puli with her as an adopted son. The story ends where it begins, with Rukmani reflecting on her life as an old woman at the end of her days.

More summaries and resources for teaching or studying Nectar in a Sieve.

Nectar in a Sieve from BookRags. (c)2022 BookRags, Inc. All rights reserved.