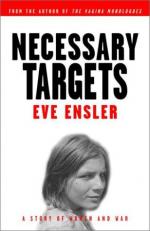 Eve Ensler
This Study Guide consists of approximately 63 pages of chapter summaries, quotes, character analysis, themes, and more - everything you need to sharpen your knowledge of Necessary Targets.

Eve Ensler was born on May 25, 1953, in New York City. Her childhood was not a happy one. She has revealed that she was sexually and physically abused by her father. After her father's death, Ensler told her mother about the abuse. Ensler has stated that it was this revelation to her mother that set her free. At that moment, Ensler told Cora Llamas, a writer for the Philippine Daily Inquirer, my entire life changed. I went from a depressed, self-hating person to a free one. Llamas went on to write in the same interview that it was because of these difficult experiences that Ensler has been able to empathize with women around the world who also have suffered abuse.

In 1975, Ensler graduated from Middlebury College in Vermont. Later, she worked as an editor for Central Park Magazine. The first of her plays to...

More summaries and resources for teaching or studying Necessary Targets.