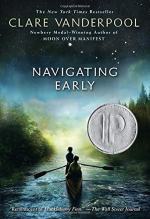 Polaris is a star in the Ursa Major Constellation. Early told a story about Polaris and his mother, The Great Bear (another name for Ursa Major). His mother called him Pi, but Polaris wanted to “earn” his name so his mother set him out on a quest so he could do so. She told him to look to the Great Bear for direction. Polaris traveled too far south and lost sight of the Great Bear and could no longer hear her voice. He became a lost soul and wandered the seas facing many perils trying to find his way home.

The Great Bear has two meanings in, “Navigating Early.” The constellation Ursa Major is also known as the Great Bear and is referred to in Early’s story about Polaris, or Pi, wandering land and sea trying to find his way home. Early...