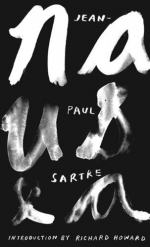 L'Etre et le néant (1943, Being and Nothingness) is Sartre's masterpiece of philosophical writing. In this work he directly expresses his fundamental philosophical ideas, which became the foundation of French existentialist thought.

Huis-clos (1945, No Exit) is regarded as Sartre's greatest dramatic play. No Exit concerns three characters who have died and who find themselves in an afterlife in which they are stuck together in a room. Through this fantastical premise, Sartre explores some of his fundamental philosophical ideas.

Les mots (1964, The Words) is Sartre's Nobel Prize—winning autobiographical account of his childhood and early adulthood.

L'étranger (1942, The Stranger), an existential novel by Albert Camus...