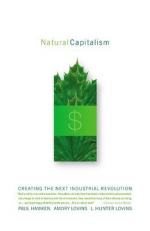 Natural Capitalism: Creating the Next Industrial Revolution Topics for Discussion

Paul Hawken
This Study Guide consists of approximately 29 pages of chapter summaries, quotes, character analysis, themes, and more - everything you need to sharpen your knowledge of Natural Capitalism.

What do you see as the most substantial hurdles to the kind of whole-system evolution the authors describe? Do you see any reasons to hope for their elimination in the near future?

What industries or systems do you observe in your daily life that could benefit from a shift to the priorities of natural capitalism?

Which parts of the example of Curitiba would you like to see implemented in your community? Are they changes you can instigate?

The example of Curitiba also demonstrated the ability a government has to effect dramatic changes in the environmental responsibility of its citizens, both in the Garbage for Food exchange, and in its requirement that manufacturers dispose of their own waste on site to inspire efficiency and recycling. What other changes can local governments make to its standards and systems to bring about similar changes?

More summaries and resources for teaching or studying Natural Capitalism: Creating the Next Industrial Revolution.