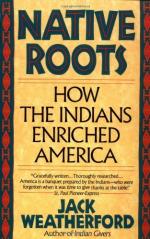 Jack Weatherford
This Study Guide consists of approximately 22 pages of chapter summaries, quotes, character analysis, themes, and more - everything you need to sharpen your knowledge of Native Roots.

This detailed literature summary also contains Topics for Discussion on Native Roots: How the Indians Enriched America by Jack Weatherford.

Native Roots: How The Indians Enriched America was written by popular historian Jack Weatherford about many of the unacknowledged contributions that Native Americans made to the contemporary culture of the United States and Canada. Each chapter is a self-contained unit with a particular lesson about how Native American influences, figures, stories, events, culture, technology or religion contributed to some well-known phenomena. It also aims to dispel a number of myths about the Native Americans, in particular by distinguishing sharply between nations, tribes and the regions that they inhabit.

Many myths are unmasked but several in particular should be mentioned. First, Weatherford shows that the Native Americans had many different forms of life beyond the merely nomadic and occasionally agricultural. When he discusses the ancient Native American city of Cahokia, the ruins of which are located just east of modern-day St. Louis, the reader gets an impression of a vibrant, settled culture with complex trade routes and extended structures of government, much more like the Aztec and Incan Empires.

Another important myth is the idea that the Native Americans only disappeared from the United States due to dying off from wars, massacres and disease. Weatherford discusses the extended, centuries-long process through which intermarriage brought Native American blood into the American and Canadian peoples as a whole. Thus the Native Americans are not some group that stands wholly in opposition to European culture but rather has been somewhat mixed into it. Most striking are the Metis people from Canada, a group of French and Native American mix that has a concept of its own ethnic identity.

Readers will be aware of the fact that the Native Americans introduced corn to the Europeans, but they will be surprised to learn that both cotton and tobacco were products used by the Native Americans and that were later introduced to Europe through their North American settler populations. Further, while many understand that Native Americans did not use European military tactics, they may not realize the extent to which Native Americans were pioneers in the development of guerilla warfare and that many troops in the U.S. Army during the Revolutionary War had absorbed these tactics and used them against the British.

All these lessons and more pervade the book, but Native Roots is not merely a collection of myth-busting tales. Rather, Weatherford uses the tales to make a single point, that the Native Americans are not a people wholly distinct from modern day Americans of European descent. Instead, the cultural, technological, racial, agricultural, historical contributions made by Native Americans show that it is better to conceive of the peoples of North America as a wide range of diverse peoples who are related to one another on a continuum rather than seeing the Native Americans and Americans of European descent as opposing racial and cultural poles.

More summaries and resources for teaching or studying Native Roots: How the Indians Enriched America.