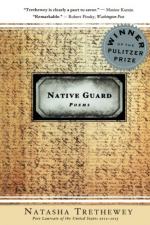 Natasha Trethewey
This Study Guide consists of approximately 46 pages of chapter summaries, quotes, character analysis, themes, and more - everything you need to sharpen your knowledge of Native Guard.

The following version of this book was used to create this study guide: Trethewey, Natasha. Native Guard. First Mariner Books, 2007.

Native Guard is a collection of poems that as a whole focuses on concepts of personal identity, regional cultural history, and the intersection between the two. The book is divided into three sections. The first section features primarily poems that explore the subject of familial memory and the death of the speaker’s mother. Poems such as “The Southern Crescent,” which juxtaposes the story of a train ride taken by the speaker’s mother with a train ride taken by the speaker, and “Genus Narcissus,” a poem about the speaker giving her mother a bouquet of daffodils, explore poetic significance of memories and how they inform our relationships with one another. Meanwhile, elegiac poems such as “Graveyard Blues” and “After Your Death” focus on the impact that the death of a loved one has on those who are left behind.

The second section of the book primarily explores the cultural history of the Deep South, specifically the state of Mississippi during and after the Civil War. “Scenes from a Documentary History of Mississippi” uses a series of photographs and films as its subjects in order to verbally tell the stories of those whose experiences have been by and large forgotten or dismissed by society or popular history. The poem “Native Guard,” the collection’s namesake, is featured in this section as well, detailing the first person perspective of a member of the Native Guard, one of the first black regiments, composed of former slaves, to fight for the Union in the Civil War. Overall, the poem follows the speaker from the early years of the war to its eventual conclusion, exploring certain significant and tragic events related to the Native Guard and giving a new, fresh voice to their story.

The final section of the book merges personal experience with the racial legacy of the south, as the poems deal directly with the way in which historical racial politics impacted the speaker’s life even before they were born and played a significant role in the formation of her identity. Many of these poems harken back to subjects and themes presented in earlier sections of the book. “Monument” is one such poem, as we see the speaker once again attempting to emotionally traverse her mother’s death. Meanwhile, “Elegy for the Native Guards” reintroduces the story of the Native Guard in an effort to memorialize and preserve their place in history.

The marriage of the speaker’s parents, a white man and a black woman, is the subject of several poems in this section as well, including “Miscegenation,” “My Mother Dreams Another Country,” “Blond,” and “Southern Gothic.” As an extension of this topic, the subject of the speaker’s own status as a biracial child in a region fraught with bigotry and racism features heavily in these poems as well. The speaker’s own anxieties regarding her societal status come through most clearly in poems such as “Pastoral,” in which she poses for a photograph with a group of famous white southern poets, and “South,” the final poem of the collection, which sees her returning to her birthplace of Mississippi asserting herself as both an outcast and native of the land.

More summaries and resources for teaching or studying Native Guard.