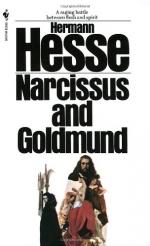 Hermann Hesse
This Study Guide consists of approximately 39 pages of chapter summaries, quotes, character analysis, themes, and more - everything you need to sharpen your knowledge of Narcissus and Goldmund.

This detailed literature summary also contains Topics for Discussion on Narcissus and Goldmund by Hermann Hesse.

Hermann Hesse's Narcissus and Goldmund, first published in 1930, is the classic tale of two best friends, a monk and a wanderer, whose lives come together, diverge, and reunite over the years. The novel takes the form of an extended parable, where the settings are generic rather than named and many of the characters represent specific qualities or modes of living. Narcissus is the first of the two title characters to be introduced. Apparently in the medieval period, Narcissus is a novice at a cloister called Mariabronn. He is a brilliant scholar with a gift for making keen, intuitive analyses of others and of what their futures might be. Goldmund is brought to the cloister by his father, who wants him to become a monk, which the boy also believes will be his future. He immediately develops admiration for both Narcissus as an intellectual and for the cloister's leader, Abbot Daniel, as a person of intense goodness and spirituality. In a hesitating fashion, Narcissus and Goldmund become friends, and the prescient novice helps the boy to recognize that his father is the one who wants him to become a monk, to expiate the sins of his mother, who ran away from the family. With the help of Narcissus, Goldmund realizes that he has blocked out memories of his mother. With this understanding comes a flood of remembrance, followed by a conviction that he must emulate the ways of his mother, who was open to romance and excitement. A sexual encounter with a young village woman cements this decision, and a few years after his arrival at the cloister, Goldmund bids Narcissus goodbye and begins his life in the wider world.

The young woman soon returns to her husband and years of wandering begin for Goldmund. A handsome young man, he is a favorite among women, many of them the wives of villagers that he encounters on his travels. He accepts their love indiscriminately and his original innocence eventually changes into the wiliness of the serial seducer. He meets a con man named Viktor who teaches him tricks of getting along as a vagrant, but when Viktor tries to rob and strangle Goldmund, he kills him in self-defense. Goldmund comes upon a beautiful statue in a chapel that inspires him to track down the artist, who teaches him to carve. He is so good that the artist offers him a permanent position and even the eventual hand of his beautiful daughter, but Goldmund decides instead to continue his wandering. The Black Death strikes the land, and he encounters terrible devastation. When a plague-infested man attacks Goldmund's current lover, he kills the fellow in a rage. Later, he seduces Agnes, the beautiful concubine of a governor, is caught and imprisoned, to be executed in the morning. Narcissus, who happens to be visiting the prison, saves Goldmund and brings him back to the cloister, where Narcissus is now the abbot. Goldmund carves beautiful statuary for the cloister, which proves to both men that Goldmund's soul is still intact despite the wrongs he has done. Later, Goldmund leaves the cloister to attempt a reunion with Agnes, but he is rejected as no longer young and beautiful. He suffers an accident on horseback and returns to the cloister, deathly ill. He dies there, leaving Narcissus to wonder if his own life of rigid discipline, scholarship, and devotion to God has been a complete one.

More summaries and resources for teaching or studying Narcissus and Goldmund.