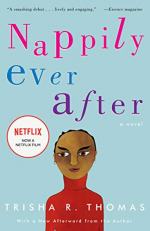 Nappily Ever After - Chapters 1 - 4 Summary & Analysis

Trisha R. Thomas
This Study Guide consists of approximately 28 pages of chapter summaries, quotes, character analysis, themes, and more - everything you need to sharpen your knowledge of Nappily Ever After.

The following book was used to create this study guide: Thomas, Trisha R. Nappily Ever After. Penguin Random House, 2000. 1.

The novel begins with Clint thinking about his fiancé and all of the qualities that he adores about her. He looks out at all of his relatives when he sees an unnamed woman enter the church, distracting him. He considers stopping his wedding before it is too late.

Venus sits in a salon chair, preparing to have her hair cut off. She reminisces about beginning the use of hair relaxers around the age of four, finally ready to free herself. She spent her entire childhood chasing after straight hair, consumed by her appearance. Venus struggled to live up to her mother’s expectations as well as to fit in to her new school, finding herself between the black and white crowd. Back in the...

More summaries and resources for teaching or studying Nappily Ever After.

Nappily Ever After from BookRags. (c)2023 BookRags, Inc. All rights reserved.