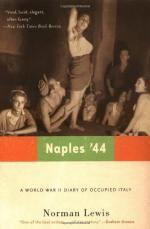 Norman Lewis (author)
This Study Guide consists of approximately 29 pages of chapter summaries, quotes, character analysis, themes, and more - everything you need to sharpen your knowledge of Naples '44.

This detailed literature summary also contains Topics for Discussion and a Free Quiz on Naples '44 by Norman Lewis (author).

Naples '44, by Norman Lewis, is a compilation of diary entries from famous author and British World War II veteran, Norman Lewis. Lewis is a young officer serving as a British intelligence agent. He lands in Italy with the Fifth Army, after much of the country has been taken back from the Axis Powers and Mussolini has surrendered and died. Lewis represents the British and their support for the Fifth Army and acts as a counter-intelligence agent in Naples, Italy.

When Lewis's section reaches Naples, they find a city devastated by the war. The people are starving and impoverished, including the former aristocratic classes. Lewis and his section set up shop in a palace and from there they are responsible for security for Naples and the surrounding areas. They must follow-up on reports of German espionage and sabotage, but the inhabitants of Naples take the opportunity to report one another as spies and saboteurs for petty financial and political advantage. Due to terrible living conditions, diseases are widespread, including venereal diseases. One third of the women are prostituting themselves for money to buy food. And rapes are a common occurrence.

Lewis must also investigate marriage applications from British men wanting to marry Italian women. Many Italian women were looking for a way out. Apparently, Naples and the surrounding areas are largely run by mobs, particularly by American-Italian mob bosses, some of whom have returned to Italy after being run out of the United States. The mob coordinates a massive black market in goods and services of all kinds that are mostly stolen from Allied camps. Later in the book, it becomes Lewis's section's job to stop the black market and crush the associated bandits. The main plot line occurs when wire-cutters force Lewis's section to capture the bandits who trade in copper. Since they cannot shut the black market down by capturing the purveyors of stolen goods they must call in other troops (in this case, some lighthearted Canadians) to help them capture bandits who are running goods. Toward the end of the book, they successfully capture some major bandits, but in reality the black market cannot be stopped. Lewis is then quickly called away.

Throughout much of the book, Lewis makes lighthearted observations of the residents of Naples. They survive beautifully and oddly, clinging to their almost medieval spiritual and cultural practices, pursuing strange love affairs and sexual encounters, reviving their love of good food and parties, and always exuding a corrupt but hospitable attitude. However, these images of these people are contrasted with the horrors of war, with images of bombed children, starving peasant women, brutal vendettas over nothing, and spurious arrests. One of the endearing features of the book are Lewis's descriptions of his encounters with notable figures in Naples, including his best informant Vincente Lattarullo. Lattarullo along with so many other residents of Naples have an indomitable spirit that Lewis envies to such a degree that were he given the chance, he would settle in Southern Italy.

More summaries and resources for teaching or studying Naples '44.