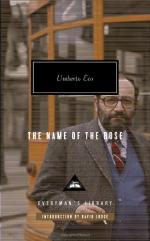 Umberto Eco
This Study Guide consists of approximately 25 pages of chapter summaries, quotes, character analysis, themes, and more - everything you need to sharpen your knowledge of The Name of the Rose.

A Distant Mirror: The Calamitous 14th Century (1978), by Barbara Tuchman, is a fascinating and readable study of Europe in the 1300s.

In 1993, noted historian of philosophy Frederick C. Copleston published the second volume of his History of Philosophy, which covers the philosophy of the Middle Ages, including discussions of both Roger Bacon and William of Ockham.

Eco's Foucault's Pendulum, translated into English by William Weaver in 1989, is another philosophical novel, investigating the secrets of the Knights Templar.

Jorge Luis Borges's Labyrinths: Selected Stories and Other Writings (1962), edited by Donald A. Yates and James E. Irby, contains some of Borges's most influential stories, including "Death and the Compass," "The Garden of Forking Paths," "Pierre Menard, Author of the Quixote," and "Tlön...

More summaries and resources for teaching or studying The Name of the Rose.

The Name of the Rose from Gale. ©2005-2006 Thomson Gale, a part of the Thomson Corporation. All rights reserved.