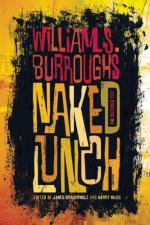 In a convoluted and disturbing string of events, a drug addict flees from the police. His journeys take him across the United States and down into Mexico and beyond. On his travels, he meets up with various members of the underground drug and homosexual cultures. Alongside the twisted narrative runs a counter story about the uses of mind control by governments and psychiatrists to manipulate, destroy and direct the masses. Told in lurid detail that disturbs and disgusts many readers, the novel presents a glimpse into the emerging counter cultures of the 1950s and gives interesting insights into how these forces effect the ongoing development of modern society.

The novel begins as Lee, a drug dealer and addict, flees arrest. He sets out across the country with several of his friends. Overtime, the group splits apart and Lee continues on his way to Mexico and down through Central and South America. At every location, Lee is involved with the local drug culture, including getting prescriptions from local doctors to fill his drug supply. Lee meets and interacts with other drug dealers, who he calls agents.

During Lee's journey he observes the populations of three fictional locations. The first is Annexia, which has a system of random bureaucracy that keeps its population in fear of arbitrary punishment. The second is Freeland, run by sadistic Dr. Benway. The third is Interzone, which centers on a common Market where all types of drugs and sexual favors are on sale. At each of these locations, many types of deviant behavior are shown as normal and commonplace, including sexual acts with young children.

Much of the novel takes places in imaginary zones, possibly hallucinations by the drug addicted narrator or imaginative descriptions of real events and people encountered by the author in his travels around the world. In these instances, archetypal characters are introduced to stand in for various types of political and social roles and movements. There is an emphasis on the field of psychiatry and the various inhuman manipulations by psychiatrists on patients in the name of research to better humanity. These chemical interactions are often contrasted to the illegal drugs that the narrator and his fellow agents deal with.

At many points in the novel, the drug abuse takes a back seat to the various types of homosexual behavior on display. There are many nightclubs and social places where groups of people congregate to find sexual partners for homosexual acts that are often accompanied by violence. These places exist in the fantasy realm rather than that of reality, as the narrator stresses that homosexuality is not accepted by his own society and that his connections with homosexuality guarantee him stronger punishment than dealing drugs.