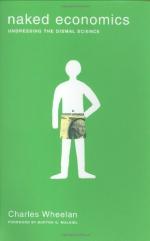 Charles Wheelan
This Study Guide consists of approximately 24 pages of chapter summaries, quotes, character analysis, themes, and more - everything you need to sharpen your knowledge of Naked Economics.

This detailed literature summary also contains Topics for Discussion and a Free Quiz on Naked Economics: Undressing the Dismal Science by Charles Wheelan.

"Naked Economics: Undressing the Dismal Science" by Charles Wheelan is a book that takes the subject of economics and breaks it down so the average reader can understand what makes an economy thrive or fail. It offers insight into morals, ethics, and regulations associated with economic decisions.

Economists use tools to look at a big picture and determine trade-offs to optimize living standards for society. They do this based on the common standard that individuals work in their own best interest. While the economy of the world seems dismal at times, the fact is that as a global economy, we are much richer than a century ago.

There are many factors to consider when factoring the well-being of economy. Everyone has different motivators and priorities, and those who are well-off have different values than others with less. In order to make the best decisions for an economy, one has to learn and understand all the factors that contribute to a decision and the results of the decisions. Sometimes the distribution if information is unbalanced. When one party in a transaction knows more than another, then problems arise.

Production is key in an economy and an agent should have enough inspiration to provide a quality product for the principal. This is difficult to do in large business where an agent might not even know the name of a CEO.

One great problem with economic development is the premise that people will act in their own best interest without considering long-term ramifications. This often has negative effects on prices and on the environment. For a strong economy, factors such as skills, education, training and an individual's health come into play.

With skills, an individual has something to offer the world. Others pay for a product or service, boosting the economy. With education, an individual can expand on skills and learn the best ways to promote the skills, enhancing the global economy. Training has the same effect, and none of this happens without decent health so one has the wherewithal to contribute to production. Governmental policies are also extremely important to an economy. There has to be some sort of control, yet too much control can destroy an economy.

While many complain about the government in the United States, the truth is that it's one of the best in the world. It offers checks and balances and is open to global trade. Globalization requires a standard monetary value and markets contribute to fair trade.

One of the most controversial issues with globalization is the concept of outsourcing. Many complain when companies hire workers overseas, causing locals to lose jobs. The author argues that outsourcing actually facilitate growth and states that a growing economy will be able to absorb the displaced workers.

The true problem, according to the author is that wealth is not being distributed evenly. Protectionism might look good in the short run, since it saves jobs, but it will slow economic growth in the long run. The author states that global trade helps the economy by lowering the cost of goods for consumers.

With economics, we utilize a set of tools in order to understand and improve a world that is far from perfect. An economists must address the following seven issues: productivity, the divide between the rich and the poor, the market, maximizing utility, monetary policies, the future, and the fiscal house.