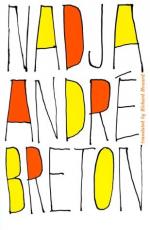 André Breton
This Study Guide consists of approximately 32 pages of chapter summaries, quotes, character analysis, themes, and more - everything you need to sharpen your knowledge of Nadja.

This detailed literature summary also contains Topics for Discussion and a Free Quiz on Nadja by André Breton.

Nadja is a surrealist novel written by French writer Andre Breton and published in 1928. The novel is an account of the author's relationship with a woman named Nadja, over a period of ten days. The narrator, Andre Breton, believes that knowing who he is may only be determined by knowing whom he "haunts." Breton also places great importance on coincidences. The Theatre Moderne is one of Andre Breton's favorite theaters because of the absurd acting and small audiences. The only play he ever really admired is called Les Detraquees, which concerns a principal and teacher who murder a student at a girl's school. On the fourth day in October, Andre Breton stops at a stall outside the Humanite bookstore, buying a book. He walks towards the opera, as the offices and workshops begin to close and people head home. He sees a young, poorly dressed woman walking towards him. She tells Breton that her name is Nadja, chosen for herself because in Russian, it is the beginning of the word hope. Nadja tells Breton about her father, who was weak, and had everything handed to him easily. Her mother is a good woman but is not a good homemaker. Nadja and Breton continue walking, and he says his wife is expecting him. Nadja seems disappointed that he is married.

The next time they meet, Nadja seems to be suffering from some kind of internal conflict. The next day, Andre is worried about her and seeks her out. She tells him she is poor, and he lends her money. She tells him a male friend once had her buy cocaine to make more money. However, the police caught her, but her friend, a judge, made sure she did not have to go to jail. Nadja tells Breton about her male friends. She adds that he will write a book about her someday. Nadja gives Breton a drawing, and they discuss mythology. They decide to leave Paris and go to the train station. A drunkard comes and bothers them again but Nadja is no longer withdrawn. Breton begins to think that Nadja is not what he thought she is. Andre begins to end his direct tale of his time with Nadja. He wonders who the real Nadja is. Sometimes her stories of her past life make Breton think her dignity could not survive such things. He remembers only a few of the things she said, sentences where he best catches the tone of her voice. Breton is told that Nadja is mad. She is eventually committed to a sanitarium. Breton does not believe that being in a sanitarium makes much difference to Nadja. He feels that he did not notice anything especially alarming about her behavior when he was with her. Breton yearns to connect with her again.

More summaries and resources for teaching or studying Nadja.