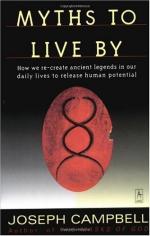 Joseph Campbell
This Study Guide consists of approximately 17 pages of chapter summaries, quotes, character analysis, themes, and more - everything you need to sharpen your knowledge of Myths to Live By.

Myths to Live By Summary & Study Guide includes comprehensive information and analysis to help you understand the book. This study guide contains the following sections:

This detailed literature summary also contains Topics for Discussion on Myths to Live By by Joseph Campbell.

Myths to Live by by Joseph Campbell is a compilation of his lectures compiled into comparative examination of each of the world's major religions, as well as its lesser-known primitive religions, all of which Campbell calls mythologies. Describing the origins of each, Campbell points out the understandings of each culture's immediate surroundings and how those understandings informed the development of that culture's mythology. As he moves through his examinations, he discusses the purposes the mythologies served within each culture, and whether or not those objectives are still useful in a post-enlightenment, scientific age. His larger purpose throughout is to use the consistencies between each mythology to find the themes common to all of humanity, written on the human mind and there for the purpose of pointing to the divinity common to every member of humanity. His ultimate thesis is that humanity is the mind of the universe, born of the earth and able to observe, think, dream, feel and affect the world in a way that has never been possible before. And so, instead of living according to literal interpretation of mythologies based on ancient understanding, he proposes that humanity is on the brink of an awakening to the poetic and eternal truth contained in the mythologies of humanity taken as a complementary whole, instead of conflicting, divisive literal histories of tiny, ancient groups.

He opens his book with a discussion of how science, in its continual march forward into the depths of every observable facet , undoes the necessity of mythologies to explain and make sense of human existence and its perpetual interaction with nature, death and other cultures. Each culture observes the laws of nature around it, and makes from those observations a set of theories about God, which explains how the livelihoods and geographies of each culture informs the style and law of each respective mythology, both the primitive and the complex. Campbell discusses the rites and ceremonies that evolve out of each culture's philosophy and points out that each culture's observations of how they interact with their world influence their ideas about the gods that guide that culture. The culture subsequently designs their rites to please the gods based on those primitive conclusions. He discusses how these mythologies are necessary to the human mind to teach children—whose ability to function is not fully developed—to which things they should be loyal and of which things they should be guarded against in order to preserve the social order into which they are born.

He devotes another two chapters to the distinctions between Eastern and Western mythologies and points out how in Eastern thought, the mythologies are understood to be informant of the inner workings of the individual, while in the West and the Levant, or the Middle East, mythologies are regarded as record of literal, external history. These differences are both reflective and informative of the sociological differences between the East and West. In the East, the highest priority is the society, and the individual's submission to his role within that society; in the West, priority is given to the individual, his uniqueness and his freedom from obligation to any ideology or social status but what he may choose. From that point, it is a natural evolution to Campbell's discussion of the dedication of Easterners to their individual arts and tireless honing of their own potential as a discipline dedicated both to posterity and eternity.

In discussing Zen, Campbell discusses its transfer from India to Japan and then to China, and its goal of releasing the individual from the net of his conception into the freedom of no mind. Evolved from the Hindu yogic practice of Om meditation, Zen is the practice of moving mentally beyond one's individuality and into the consciousness shared by all of humanity, explained by the analogy of the difference between each individual light bulb and the light that many bulbs create together. He discusses several teaching approaches to this state and concludes with the idea that God is contained in every individual, available to each for wisdom both from one's own understanding and from the teaching of the people one encounters.

Next follows a discussion of the mythologies of love, where Campbell contrasts the loves of compassion and of passion, one serving the objects of love and the other the individual. He further discusses the absence of love as a romantic thing, eros, in the early mythologies while marriages were still politically and economically motivated. For that particular kind of love, Campbell finds his wisdom in places such as the story of Tristan and Isolt, and moves from there to illustrations of love as compassion and charity.

In his chapter on war and peace, Campbell points out how thoroughly the Judeo-Christian scriptures are histories of wars fought under the banner and protection of the Hebrew God, and points out the calls to war on those who are not Muslim in the Koran. His observations on teachings in favor of peace come from Jesus' teaching to love one's enemies and pray for one's persecutors. The remainder of the chapter is a discussion of the various eschatological suppositions about the time when wars will culminate and end, and peace will rule on earth.

The final three chapters, on schizophrenia, the moon walk, and no more horizons, contain Campbell's uniting all of his themes into a cohesive proposition that men are all made to be taught in the formula of myths, based on their being parts and packages of the divine mind. In an age when science has given humanity a perspective of itself as the inhabitants of a singularly miraculous planet, it will become necessary to allow our unity and intellectual evolution to carry us forward to an age when our philosophies and mythologies teach and unite us with their poetic truths instead of dividing us by remaining statical, regional dogmas.

More summaries and resources for teaching or studying Myths to Live By.

Myths to Live By from BookRags. (c)2022 BookRags, Inc. All rights reserved.