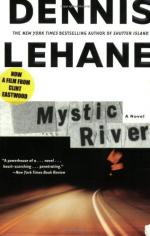 Dennis Lehane
This Study Guide consists of approximately 47 pages of chapter summaries, quotes, character analysis, themes, and more - everything you need to sharpen your knowledge of Mystic River.

Like most of Lehane's novels, Mystic River is set in Boston, the city he grew up in and eventually returned to as an adult. Lehane's familiarity with the area allowed him to create authentic dialogue and speech inflections. His background also afforded him insight into how the working class of Boston's neighborhoods really thought and lived. He spent nearly ten years thinking about Mystic River before actually writing it.

In Mystic River, three young boys—Dave Boyle, Sean Devine, and Jimmy Marcus—are linked for life after Dave is kidnapped while Sean and Jimmy watch. Dave's subsequent molestation scars him deeply and leaves the other two boys with conflicting feelings over how close they came to being victimized. Twenty-five years later, the three are thrown together again when Jimmy's nineteen-year-old daughter Katie is murdered. Sean is the state trooper investigating the crime, while Dave becomes a lead suspect. Mystic River explores the nature of the tightly knit neighborhoods and families of Boston, and their response to outsiders. This close-knit environment serves as the backdrop for a story that spotlights how one incident acts as a thread that can be woven into so many lives.

Mystic River was popular with readers, spending several weeks on the New York Times bestseller list. Critics also gave it generally good reviews. Clint Eastwood directed the acclaimed film version of the novel, which was shot in Boston. Sean Penn won the 2003 Academy Award for Best Actor for his portrayal of Jimmy Marcus, and Tim Robbins won Best Supporting Actor for his role as Dave Boyle.

More summaries and resources for teaching or studying Mystic River.