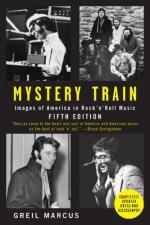 In his book MYSTERY TRAIN: IMAGES OF AMERICA IN ROCK 'N' ROLL, Greil Marcus presents a profound statement about the beginnings of the genre of rock 'n' roll music. Marcus critiques not only the effect the music had on Americans, but also the effect that America and its condition at that time period had on the music that was being produced. Marcus begins his analysis with two little known singers who he believes to be the forerunners of rock 'n' roll music, then traces the development through Elvis, the "king" of rock 'n' roll.

This critique of rock 'n' roll music begins with singers Harmonica Frank and Robert Johnson. Marcus considered these singers to be the precursors to traditional rock 'n' roll music. Frank makes his mark on rock music with the idea of unbridled freedom that he portrays in his music and his lifestyle. Johnson, on the other hand, addresses the frustration that Americans face when they are not able to attain the American dream. Johnson also addresses the reality of evil in the world.

Marcus then moves on to discuss the music of the Band, Sly Stone, Randy Newman and Elvis. These groups are presented as representations of the first of the rock 'n' roll bands. Marcus discusses not only the music of each group but also the atmosphere surrounding the release of their music. Topics covered include racial tension, the pursuit of the American dream, the reality of evil, and the need for unity. Through his book Marcus also discusses the statement each musician hopes to make through their music. He also discusses the audience's reaction to the music as well as the artist's reaction to or relationship with their audience.

In conclusion Marcus believes the artists he writes about in his book are those that have in some way affected the course of America's growth and the lives of Americans. They each represent some portion of America that helps to make up the whole of the country. He finishes by equating these artists to democrats fighting an unending battle between art and politics.