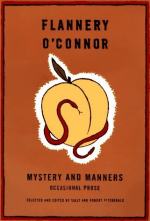 Plot Summary
+Chapters Summary and Analysis
The King of the Birds
The Fiction Writer & His Country, Some Aspects of the Grotesque in Southern Fiction and The Regional Writer
The Nature and Aim of Fiction, Writing Short Stories and On Her Own Work
The Teaching of Literature and Total Effect and the Eighth Grade
The Church and the Fiction Writer and Novelist and Believer
Catholic Novelists and Their Readers and The Catholic Novelist in the Protestant South
Introduction to A Memoir of Mary Ann
Free Quiz
Characters
Objects/Places
Themes
Style
Quotes
Topics for Discussion
Order our Mystery and Manners; Occasional Prose Study Guide

Flannery O'Connor
This Study Guide consists of approximately 24 pages of chapter summaries, quotes, character analysis, themes, and more - everything you need to sharpen your knowledge of Mystery and Manners; Occasional Prose.

This detailed literature summary also contains Topics for Discussion and a Free Quiz on Mystery and Manners; Occasional Prose by Flannery O'Connor.

Mystery and Manners; Occasional Prose by Flannery O'Connor is a collection of essays and articles written by O'Connor and edited by Sally and Robert Fitzgerald. The essays explore the popular Southern fiction writer in context with preconceived perceptions of the Southern Gothic style of writing. O'Connor also delves into the mystery of Christian writers whose beliefs are almost always in conflict with the popular mores of the day. O'Connor's strong Catholic beliefs guide her work and her view on writing in authentic truth.

The book begins with the essay, The King of the Birds, which is representative of O'Connor's essay style. As the reader will learn, O'Connor believes in writing about things and people which are familiar to her, and this piece addresses her love for collecting birds which culminates in her flock of peacocks. O'Connor not only describes the birds' physicality but also their impact on her life and on the workings of her Georgia farm. This is the only essay of O'Connor's which appears in the book.

The book then moves on to regionalism in writing, especially the Southern writer; and there are four essays included on this topic. O'Connor presents her views on the importance of regionalism in writing, especially Southern writing, and the ever-increasing lack of it in the work she sees coming out of the region. She also explains the nature of the grotesque found in her writing and the place this style has in the Southern Gothic style overall.

The book also contains three essays on the subject of writing fiction in general, short stories, and O'Connor's own work. O'Connor relates the important qualities in fiction writing and in the fiction writer and even addresses some of these points as they relate to her own work.

Because she was such a passionate writer and advocate for good fiction, O'Connor gets especially heated in two essays on teaching literature in schools, particularly eighth grade when the students are more inclined to tell the teacher what they will read instead of being guided into good literature.

O'Connor's passion for the discussion of religion digs deep into a set of four essays on the religious aspect of the Christian novelist and reader especially in the Protestant South. O'Connor's devout Catholicism guides her writing and her review of other religious writing and she instructs the reader on its authenticity and place in America.

As the book closes, the editors include O'Connor's introduction to a story written about a disfigured girl. Because this book is one of essays, most of which are extracted from speeches or papers written by O'Connor, the editors are careful to note the timing, location, and delivery of the material.

More summaries and resources for teaching or studying Mystery and Manners; Occasional Prose.