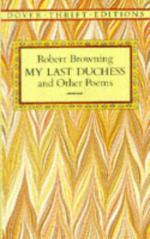 Introduction & Overview of My Last Duchess

Robert Browning
This Study Guide consists of approximately 31 pages of chapter summaries, quotes, character analysis, themes, and more - everything you need to sharpen your knowledge of My Last Duchess.

First published in the collection Dramatic Lyrics in 1842, "My Last Duchess" is an excellent example of Browning's use of dramatic monologue. Browning's psychological portrait of a powerful Renaissance aristocrat is presented to the reader as if he or she were simply "eavesdropping" on a slice of casual conversation. As the poem unfolds, the reader learns the speaker of the poem, Duke Ferrara, is talking to a representative of his fiancée's family. Standing in front of a portrait of the Duke's last wife, now dead, the Duke talks about the woman's failings and imperfections. The irony of the poem surfaces as the reader discovers that the young woman's "faults" were qualities like compassion, modesty, humility, delight in simple pleasures, and courtesy to those who served her.

Using abundant detail, Browning leads the reader to conclude that the Duke found fault with his former wife because she did not reserve her attentions for him, his rank, and his power. More importantly, the Duke's long list of complaints presents a thinly veiled threat about the behavior he will and will not tolerate in his new wife. The lines "I gave commands; / smiles stopped together" suggest that the Duke somehow, directly or indirectly, brought about the death of the last Duchess. In this dramatic monologue, Browning has not only depicted the inner workings of his speaker, but has in fact allowed the speaker to reveal his own failings and imperfections to the reader.

More summaries and resources for teaching or studying My Last Duchess.

My Last Duchess from Gale. ©2005-2006 Thomson Gale, a part of the Thomson Corporation. All rights reserved.