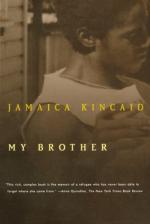 Jamaica Kincaid
This Study Guide consists of approximately 51 pages of chapter summaries, quotes, character analysis, themes, and more - everything you need to sharpen your knowledge of My Brother.

Lopate, Phillip, Introduction to The Art of the Personal Essay, Doubleday, 1994.

More summaries and resources for teaching or studying My Brother.

My Brother from Gale. ©2005-2006 Thomson Gale, a part of the Thomson Corporation. All rights reserved.