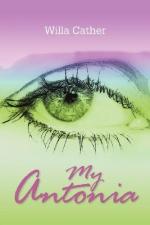 Willa Cather
This Study Guide consists of approximately 80 pages of chapter summaries, quotes, character analysis, themes, and more - everything you need to sharpen your knowledge of My Antonia.

Jim notes that A'ntonia acts superior to him and knows it may have to do with her being four years older than he is. A'ntonia and Jim ride to Russian Peter's to borrow a spade for her brother Ambrosch. On their return, the children decide to investigate the prairie dog holes by digging into them. A'ntonia and Jim see a five foot long rattlesnake, which is described as being an ancient evil. Jim kills it with the spade and suddenly becomes a big hero to A'ntonia. They drag the dead snake back to show everyone Jim's accomplishment. Upon reflection, Jim knows luck allowed him to kill the rattlesnake .

More summaries and resources for teaching or studying My Antonia.

My Antonia from Gale. ©2005-2006 Thomson Gale, a part of the Thomson Corporation. All rights reserved.