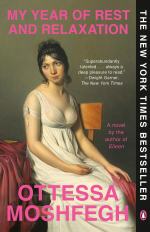 My Year of Rest and Relaxation Summary & Study Guide

Ottessa Moshfegh
This Study Guide consists of approximately 51 pages of chapter summaries, quotes, character analysis, themes, and more - everything you need to sharpen your knowledge of My Year of Rest and Relaxation.

My Year of Rest and Relaxation Summary & Study Guide Description

My Year of Rest and Relaxation Summary & Study Guide includes comprehensive information and analysis to help you understand the book. This study guide contains the following sections:

This detailed literature summary also contains Quotes and a Free Quiz on My Year of Rest and Relaxation by Ottessa Moshfegh.

The following version of this book was used to create this study guide: Moshfegh, Ottessa. My Year of Rest and Relaxation. New York: Penguin Press, 2018.

The novel begins in June of 2000, when the unnamed narrator was 26 years old. After a period of profound depression, the narrator decided to attempt to sleep through an entire year of her life, using sedatives prescribed to her by her wildly unprofessional psychiatrist, Dr. Tuttle. The narrator's depression was partially caused by the deaths of her parents (her father from cancer, her mother from suicide) a few years prior, however, she never had a close relationship with them. The only people in the narrator's life at this time were Reva, her friend from college, and Trevor, her on-again/off-again boyfriend. Reva largely came to the narrator's apartment to complain about her affair with her married boss and her mother's illness, and the narrator had not seen Trevor since New Year's Eve. He was a manipulative and abusive man, but the narrator did not believe she deserved better. The narrator once had a job working at an art gallery in Chelsea, but she was fired for regularly falling asleep in a supply closet. She met an artist there named Ping Xi who, it was rumored, killed dogs by locking them in a freezer in order to stuff them for his taxidermy art.

The narrator continued down this path of near constant sleeping, alternated with watching her favorite movies, for several months. She continued seeing her psychiatrist and lying about having insomnia so that she would be prescribed more powerful drugs, including one called Infermiterol. She began waking up to find that she had moved things around in her sleep and had sexually explicit conversations with strangers online. She recalled painful memories from her past, like being ignored by her parents as a child, and kicked out of Trevor's car the last time she saw him. Reva came over and told the narrator her mother died. Feeling unable to deal with Reva's feelings, the narrator took an Infermiterol, which caused her to black out for an entire night. She woke up dressed in clothes she had never seen before, with Chinese food on the table she did not remember ordering. Shortly after waking, she took another Infermiterol and woke up on a train to Long Island. She was wearing a fox fur coat she did not recognize and carrying white roses with a card indicating they were for Reva. She realized she was on her way to Reva's childhood home for her mother's funeral.

Resting in Reva's room before the funeral, the narrator tried to force herself to feel sad. She recalled her father's slow, agonizing death and the aftermath, in which her mother completely failed to comfort her, and instead hid in her bedroom with a bottle of vodka. Shortly thereafter, her mother had killed herself. Despite these horrible memories, the narrator still did not feel sad, only jealous that Reva had such uncomplicated love and grief for her mother.

Back in the city, the narrator took another Infermiterol and blacked out for three days. When she woke up, she discovered Polaroid pictures on her coffee table featuring various young people having fun, one of whom she recognized as Ping Xi, the artist from her old job. She took several sleeping pills, but found herself unable to drift off, so she took more. This cycle continued for several days, with the narrator taking more and more pills and never sleeping. She called Trevor and demanded he come over. She then took an Infermiterol, blacked out, and woke up to him having sex with her. He told her it was the last time, then left. Later, Reva came over. She was distressed about breaking up with her married boss/boyfriend, and subsequently being transferred to a new department in the World Trade Center. The narrator gave her an Infermiterol and took one herself.

The narrator woke up to discover that all of her pills were gone. Assuming Reva took them while she was blacked out, she raced to Reva's apartment and let herself in with her spare key. She found her pills in Reva's bathroom, but the door jammed and she was locked inside until Reva came home. While stuck in the bathroom, the narrator formulated a plan. She would lock herself in her apartment for four months, taking the remainder of her Infermiterol, a pill every three days, essentially remaining blacked out the entire time. She asked Ping Xi to check on her and bring her food, with the understanding that he could use her in his art in whatever way he liked while she was not lucid. The four months passed without incident, and the narrator emerged from them feeling a newfound sense of peace and possibility about her future. She saw Reva once more and told her that she loved her. Reva died on 9/11 in the World Trade Center.

More summaries and resources for teaching or studying My Year of Rest and Relaxation.

My Year of Rest and Relaxation from BookRags. (c)2022 BookRags, Inc. All rights reserved.