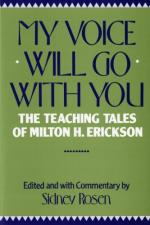 My Voice Will Go with You: The Teaching Tales of Milton H. Erickson, M.D. Themes

Sidney Rosen
This Study Guide consists of approximately 23 pages of chapter summaries, quotes, character analysis, themes, and more - everything you need to sharpen your knowledge of My Voice Will Go with You.

According to Erickson's beliefs, little if anything can be accomplished without rapport. This applies to life situations as well as therapy. If a person cannot feel a sense of rapport with another, any type of relationship will be practically impossible.

At the root of the human psyche is the need to feel accepted and to belong. Rapport effectively fills that need. In reference to patients, Erickson's rapport is what allowed him to be successful in helping a large number of patients.

For example, Erickson tells a story of a young boy who was crippled and began to withdraw to the point of almost becoming mute. Teachers and parents were worried about the boy who had once been an outgoing and sociable person. The boy had experienced a tragedy that left him crippled. Erickson, having suffered from polio as a child, related to the boy. One day, Erickson, the...

More summaries and resources for teaching or studying My Voice Will Go with You: The Teaching Tales of Milton H. Erickson, M.D..

My Voice Will Go with You: The Teaching Tales of Milton H. Erickson, M.D. from BookRags. (c)2021 BookRags, Inc. All rights reserved.