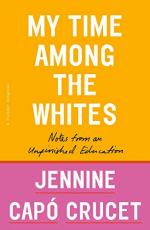 Summary
+Chapters Summary and Analysis
"What We Pack" and "¡Nothing Is Impossible in America!"
"Magic Kingdoms" and "Say I Do"
"Going Cowboy" and "The Country We Call Home"
"Ease of Exit" and "Imagine Me Here, or How I Became a Professor"
"A Prognosis"
Important People
Objects/Places
Themes
Styles
Quotes
Topics for Discussion
Order our My Time Among the Whites Study Guide

Related Topics
Make Your Home Among Strangers: A Novel

My Time Among the Whites Summary & Study Guide

Jennine Capó Crucet
This Study Guide consists of approximately 36 pages of chapter summaries, quotes, character analysis, themes, and more - everything you need to sharpen your knowledge of My Time Among the Whites.

My Time Among the Whites Summary & Study Guide Description

My Time Among the Whites Summary & Study Guide includes comprehensive information and analysis to help you understand the book. This study guide contains the following sections:

This detailed literature summary also contains Topics for Discussion on My Time Among the Whites by Jennine Capó Crucet.

The following version of this book was used to create this study guide: Crucet, Jennine Cepó. My Time Among the Whites: Notes from an Unfinished Education. New York: Picador, 2019.

In this non-fiction essay collection, author and professor Jennine Cepó Crucet reflects on her education, her love of literature, her familial relationships, and race and racism in America. Part I, titled "Early Encounters," begins with an essay called "What We Pack." In this essay, Crucet, a Cuban American from Miami, describes what it was like to be a first-generation college student. She earned her degree in English at Cornell University, which opened doors for her professionally and socially that her family could not even fathom. However, in the beginning, she struggled to acclimatize, arriving unprepared and having to learn for herself how to navigate the white-dominated world of academia. In the next essay, "¡Nothing Is Impossible in America!," Crucet criticizes the American Dream as an ideology of whiteness that everyone is forced to buy into. She tells the story of how her Cuban parents named her after the 1980 Miss USA runner-up as an attempt to Americanize (and whiten) her and how she struggled to embody the type of white femininity they hoped for and expected from her, having internalized the racism they experienced and therefore wanting better for their daughter. In the third and final essay in this first part, titled "Magic Kingdoms," she describes her complicated relationship with the Disney World theme parks and the vision of Americana that it indoctrinates. One on hand, as a child—and to this day, she regretfully admits—Disney holds a special place in her heart. She loves the fantasy and the fun. However, after returning to the theme park as a college student and again as an adult, she recognized that the rides, characters, food, and music were often steeped in racist and heteronormative ideas.

Part II, "Various Immersions," begins with an essay titled "Say I Do," which is about her brief marriage to a white man. Mostly, it is about the wedding as a symbol of cultural expression, rather than the marriage itself, which was short-lived. She attempted to bridge their two cultures musically, but in the end, she watches in dismay as the white guests dance only to the English songs and the Cuban guests dance only to the Spanish songs. After her divorce, she moved to Lincoln, Nebraska, and ironically rented an apartment in a building that doubled as a wedding venue, exposing her to endless parades of white American wedding clichés. The next essay, "Going Cowboy," describes Crucet’s quest to learn about the culture and background of her new rural first-generation students after moving to Lincoln to become a professor at the University of Nebraska. She visits a ranch that allows its guests to play the role of cowboy, and there she, witnesses first-hand the racist assumptions that white Americans often hold of Latinx people, but also realizes that she is just as prone to making cultural stereotypes and seeing other people as sources of edutainment as they are. Next, "The Country We Now Call Home," looks at the election of Trump, the terrifying result of America’s apathy. Just like Miamians are prone to ignoring hurricane warnings, the American voter failed to recognize that if they did not act swiftly, Trump might actually win.

Part III, "Resistance in Action," opens with an essay titled "Ease of Exit." In this essay, Crucet returns to the theme of the American Dream, and charts her experience with house ownership, and how she gradually learned to deconstruct the association she had made between houses and family. She comes to accept that a single, professional, childless woman like her could own a house. The next essay is titled "Imagine Me Here, or How I Became a Professor," and describes her career path and the dismal state of academia in terms of racial representation. She reflects on the notion of white privilege, begging readers to accept their role and complicity in the maintenance of racial hierarchies and emphasizing the importance of universities hiring more professors of color, because students who see themselves in their college authorities are more likely to graduate. Finally, the book concludes with a chapter titled "A Prognosis," in which she tells the parallel stories of her relationship with her father, especially during the shock of his leukemia, and her own health struggles as she recovers from the trauma of a sexual relationship she was not comfortable with.

More summaries and resources for teaching or studying My Time Among the Whites.

My Time Among the Whites from BookRags. (c)2022 BookRags, Inc. All rights reserved.