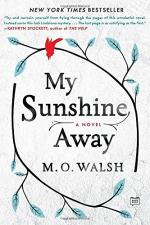 My Sunshine Away Summary & Study Guide

M.O. Walsh
This Study Guide consists of approximately 70 pages of chapter summaries, quotes, character analysis, themes, and more - everything you need to sharpen your knowledge of My Sunshine Away.

My Sunshine Away Summary & Study Guide includes comprehensive information and analysis to help you understand the book. This study guide contains the following sections:

This detailed literature summary also contains Quotes and a Free Quiz on My Sunshine Away by M.O. Walsh.

My Sunshine Away by M.O. Walsh is a literary novel that reads like a memoir and incorporates a healthy dose of mystery. The unnamed protagonist and narrator tells the story of his difficult teen years as he struggles to understand love, responsibility and what it means to grow into a good man. Beginning with his admission that he was one of the suspects in the rape of his neighbor, friend and first crush Lindy Simpson and running through to the eventual discovery of the perpetrator 18 years later, the novel is filled with suspense, rich insights and often disturbing revelations about the residents of Piney Creek Road.

The novel begins as the narrator recounts the details of the night Lindy Simpson was raped on a dark stretch of Piney Creek Road within the Woodland Hills community, a suburb of Baton Rouge. He reveals that he was one of the four suspects in the case and asks for the opportunity to explain himself. The narrator's first recollection of watching Lindy was from behind his window shades as she rode her bike down the street. He also recalls a time when he made a picture of Lindy's form out of pieces of bark as he sat watching her work in her front yard. A third revelation is his foray into pornography. Having seen drawings done by a fellow student at school, the narrator became hooked on drawing pictures of Lindy in provocative poses and saying suggestive things. He drew as a way of working out his fixation on her and trying to learn what his sexuality was all about. The narrator then proceeds to provide detailed information on most of the other key residents in the community, including the Kern brothers, the Landry's and Lindy herself.

The Kern brothers were dealt with rather quickly. Duke Kern was the younger of the two and hung out with the group of kids playing in the woods behind the development. He developed a brief and rather secret relationship with Lindy following a game of King and Queen of the Woods that the kids played one day. Perhaps because of this tie, Duke was never considered as a suspect. But his older brother, Bo, was on the list. Bo had a mean temper and a violent personality. He was known to beat up people and smash things for no reason. He worked as a bouncer at a nearby bar and was issued a restraining order by a local college girl. Because of his behavior he is naturally considered a suspect, even by his distraught mother. In a front-yard confrontation between Lindy's father and Bo, he was finally dismissed as a suspect.

Mr. Landry is also introduced as the large and wild looking neighbor who scared all the kids. He often headed into the woods for hours in search of a stray dog. His adopted son, Jason, secretly fed and cared for the dog and then chased it away again in order to protect it from his abusive father. Jason became a suspect in the case as well, given his strange and somewhat abusive behavior toward others. He was kicked out of the Perkins School and often behaved inappropriately toward girls. Jason took the narrator into his house and showed him a collection of photographs that he had stolen out of his father's secret locked room. Many of the women in the community were captured in the images, including Lindy. The narrator begged Jason to let him keep one, a move he later regretted. Following a failed fishing trip, an attempt at bonding with his father, the narrator's mother discovered his collection of Lindy memorabilia and pornography. She was horrified and began suspecting that her son might have been responsible for Lindy's rape.

The narrator also recalls when he first fell in love with Lindy. All the kids were gathered in the school for the launching of the Space Shuttle Challenger. When the tragic explosion occurs, Lindy threw up on herself and the narrator is impressed that she was such a sensitive person that the tragedy would make her physically ill. From then on he is smitten and makes an internal vow to protect her from whatever injustice may occur. He fails in this regard however when later in the story he purposefully tells the guys in the locker room at school that Lindy was raped. She is devastated and does not speak to him for the next year. She also begins attending therapy which really only serves to provide her with new information on ways to rebel and experiment with dangerous, unhealthy behaviors.

Lindy continued to struggle with the after effects of the rape. She became crude and very sexually oriented. Once she and the narrator began speaking again they continued their friendship. They had nightly phone conversations initially about the Jeffrey Dahmer case in the news. They played Truth or Dare over the phone and they both masturbated in their rooms while on the phone. The narrator wrestled with wanting more from his relationship with Lindy and he wanted to solve the crime for her. He finally got his chance when Jason gave him the key to his father's secret room and helped him to sneak into the house. He said that there was evidence in the room that would tie Mr. Landry to Lindy's rape. Although this was not the case, Mr. Landry was investigated for abusing the many foster children that had been in his care. Lindy had it out with the narrator in a very public scene as she yelled at him for trying to solve the crime. He finally understood that she didn't want to know who raped her, she just wanted to move on.

Sixteen years later, the narrator unexpectedly ran into Lindy and her husband following an LSU football game. Linday was healthy and obviously happy. The narrator also stumbled across evidence that provided the answer to who committed the rape. Even though he finally solved the crime, he kept his knowledge to himself because he understood that Lindy did not need to know in order to heal.

More summaries and resources for teaching or studying My Sunshine Away.

My Sunshine Away from BookRags. (c)2022 BookRags, Inc. All rights reserved.