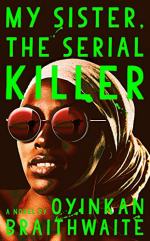 Oyinkan Braithwaite
This Study Guide consists of approximately 35 pages of chapter summaries, quotes, character analysis, themes, and more - everything you need to sharpen your knowledge of My Sister the Serial Killer.

My Sister the Serial Killer Summary & Study Guide includes comprehensive information and analysis to help you understand the book. This study guide contains the following sections:

This detailed literature summary also contains Quotes and a Free Quiz on My Sister the Serial Killer by Oyinkan Braithwaite.

The following version of this book was used to create this study guide: Braithwhite, Oyinkan. My Sister, the Serial Killer. New York: Doubleday, 2018.

The novel is set in modern-day Lagos, Nigeria. The protagonist is Korede, a Nigerian woman who works as a nurse at a local hospital. She comes from an upper middle-class family and lives with her younger sister and their widowed mother. Korede’s younger sister, Ayoola, has murdered three different men in the past years, all of whom were men she was dating. Korede, bound by a sense of familial obligation, has consistently helped Ayoola dispose of the bodies and cover up the crimes.

Korede has secret romantic feelings for Tade, a doctor who works at the same hospital. However, when Ayoola visits the hospital one day, Tade immediately becomes attracted to Ayoola. Ayoola is described as being much more attractive than Korede in terms of physical appearance. Ayoola and Tade soon begin dating, and Korede worries that Ayoola will eventually hurt or kill Tade. Menawhile, police have begun to investigate the death of Femi, the most recent of Ayoola’s victims. Because Ayool and Femi were dating, the police interrogate Ayoola and Korede, but they deny knowing anything about his disappearance.

Korede vents the stress of her life by talking to a comatose patient named Muhtar. Muhtar eventually awakes from his coma and tells Korede that he was able to hear what she said to him while he was comatose. He therefore knows about Ayoola’s crimes, but he promises not to tell anyone about them, as he does not want Ayoola to be arrested as an accomplice. He urges Korede to free herself by turning in Ayoola to the police, but Korede is unable to bring herself to do so. Meanwhile, Muhtar asserts his desires in his own family life by refusing to endorse his son’s new engagement. This causes tension between Muhtar and his wife, and Muhtar asks for a divorce.

Ayoola begins to neglect Tade and date a married man named Gboyega. Tade says to Korede that Korede is to blame for this behavior; Korede is deeply offended. Gboyega eventually dies under mysterious circumstances, and it seems to Korede that Ayoola poisoned him. Through flashbacks, the novel reveals that Korede and Ayoola’s father was quite abusive, and the narrative even implies that Ayoola and/or Korede may actually have secretly killed him. Despite his abusiveness, Korede’s mother consistently pretends that she always loved her husband, for she fears social ostracism otherwise.

Ayoola and Tade begin dating again, and Tade reveals to Korede that he wishes to propose marriage to Ayoola. It becomes clear to Korede that he is only attracted to Ayoola for her looks. Korede tries once again to warn him not to pursue a relationship with Ayoola, but Tade does not heed the warning. After Tade proposes marriage to Ayoola, Ayoola tries to kill him. Tade injures Ayoola in self-defense. Ayoola and Korede lie that Tade was the aggressor, and he is sent to jail for assault. At the end of the knowledge, Korede appears to fully embrace the idea that she will never be able to be disloyal to Ayoola, and so she will have to continue helping to cover up Ayoola’s crimes.

More summaries and resources for teaching or studying My Sister the Serial Killer.

My Sister the Serial Killer from BookRags. (c)2022 BookRags, Inc. All rights reserved.