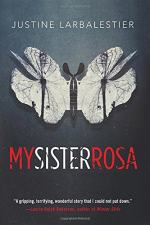 Justine Larbalestier
This Study Guide consists of approximately 67 pages of chapter summaries, quotes, character analysis, themes, and more - everything you need to sharpen your knowledge of My Sister Rosa.

This Australian passport is a symbol of Rosa’s ability to behave badly with no one noticing. Che has been watching Rosa closely but does not know when she managed to get the passport away from their fellow passenger.

The Hare Psychopathy Checklist is a benchmark against which he can compare Rosa’s behavior.

Apinya’s guinea pig is a symbol of Rosa’s callousness. Because Rosa wanted to watch something die but had promised Che not to kill anything herself she talked Apinya into killing her pet so Rosa could watch.

This battered Bible that Sojourner gives to Rosa is a symbol of the goodness of Sojourner’s heart. Sojourner gives Rosa the first Bible she ever had because she believes that Rosa is sincere in her desire to read the Bible and...

More summaries and resources for teaching or studying My Sister Rosa.