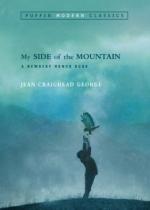 My Side of the Mountain Summary & Study Guide

Jean Craighead George
This Study Guide consists of approximately 38 pages of chapter summaries, quotes, character analysis, themes, and more - everything you need to sharpen your knowledge of My Side of the Mountain.

My Side of the Mountain Summary & Study Guide Description

My Side of the Mountain Summary & Study Guide includes comprehensive information and analysis to help you understand the book. This study guide contains the following sections:

This detailed literature summary also contains Quotes and a Free Quiz on My Side of the Mountain by Jean Craighead George.

“My Side of the Mountain” is a young adult novel by Jean Craighead George, which follows a year spent in the wild by New Yorker, Sam Gribley. When the novel begins, Sam has just made it through his first snowstorm successfully, and he recounts all the time that led up to it. In May, with only $40 and a few other odds and ends, such as a penknife and a few changes of clothing, Sam heads north to the Catskill Mountain town of Delhi. His family owns ancestral land above the town on Bitter Mountain, and Sam, tired of living in crowded New York, is determined to make a life off the land. He has prepared for the journey extensively, studying wildlife survival at the New York City Public Library, and in the library in Delhi.

Sam heads up to his great-grandfather’s property, and there begins his life in the wild. He burns out a cave in a massive Hemlock tree in which to live, and begins to gather and store food, from plants and wild vegetables to apples and small game. Sam also manages to take a baby peregrine hawk from her nest, and raises her as a pet, naming her Frightful. Despite the mountain’s isolation, many tourists and local residents end up passing by. Sam avoids most of them, speaking to only a few, such as Bando, the English professor, who ends up at Sam’s place by accident, having lost his way. Sam spends the autumn continuing to collect food and supplies for the winter. The first snow storm passes, and at Christmas, Bando returns. Sam’s dad also appears for a visit and is incredibly proud of his son.

By the spring, news of Sam’s activities on the mountain have made it into the news. He begins to realize that he wants to be found, that he misses having people around – though not as close as they were in New York. At the end of the novel, Sam’s entire family – his father, mother, and eight siblings, including Alice (who will factor into the novel’s sequel, “On the Far Side of the Mountain”), come not to visit Sam, but to make a new home on the mountain. Sam is incredibly happy about this, but unhappy his mother will no longer allow him to live in a tree.

More summaries and resources for teaching or studying My Side of the Mountain.

My Side of the Mountain from BookRags. (c)2022 BookRags, Inc. All rights reserved.