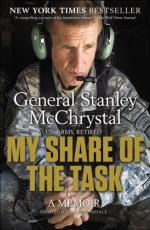 My Share of the Task Summary & Study Guide Description

My Share of the Task Summary & Study Guide includes comprehensive information and analysis to help you understand the book. This study guide contains the following sections:

This detailed literature summary also contains Topics for Discussion on My Share of the Task by Stanley A. McChrystal.

"My Share of the Task" is a memoir by General Stanley McChrystal, U.S. Army, Retired, detailing his military service from West Point through the War on Terror.

McChrystal grows up reading biographies and histories of leaders, heroes, and military battles, a passion for reading instilled in him by his mother. His father, a member of the Armed Forces, serves proudly in Vietnam. McChrystal enters West Point in the 1970s, serving at a time when public distrust of the military is at an all time high, and support and pride is at an all time low. Nevertheless, MyChrystal proudly serves, graduating from West Point, and going on to serve in the Airborne and Army Rangers, serving in a variety of official positions, and meeting a number of future generals, like Ray Odierno and David Petraeus.

McChrystal is promoted again and again, and as the 1990s emerge, Islamic terrorism becomes a major driving force behind U.S. foreign policy. Following September 11, McChyrstal is appointed to command special forces group Task Force 714, serving in both Afghanistan and Iraq, where he helps to implement the successful counterinsurgency strategies that changes the course of both wars in favor of the Americans. McChrystal is ultimately appointed to command all NATO forces in Afghanistan, where he begins a campaign to minimize civilian deaths, and make his command transparent. However, Rolling Stone Magazine runs a hit piece, full of false allegations, and critical of the efforts in Afghanistan. McChrystal, shamed by the piece, resigns his command and from the Army, knowing that the controversy is detrimental to the war effort.