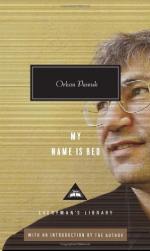 My Name Is Red Summary & Study Guide includes comprehensive information and analysis to help you understand the book. This study guide contains the following sections:

This detailed literature summary also contains Topics for Discussion and a Free Quiz on My Name Is Red by Orhan Pamuk.

My Name is Red by Orhan Pamuk is an historical novel translated from Turkish by Erdağ M. Göknar and set in late 16th century Istanbul. Black returns to Istanbul to help his uncle with a secret book, written by Enishte. As he attempts to solve a murder related to the provocative book and win the love of his beautiful cousin, a conflict between art and religion intensifies. My Name is Red is both a mystery and a love story amidst a religious world, where illustrations are both feared and valued.

Black's uncle invites Black to return to Istanbul to help with preparing a book for the Sultan, using the Frankish artistic techniques, which pose a religious problem. Black's first assignment is to solve the murder of Elegant, the gilder for the book. The other master artists, nicknamed Stork, Olive and Butterfly are the primary suspects. Before Black begins his investigation, he longs to see the face of Shekure, the reason he was banished twelve years ago. He only sees her sons, while Shekure spies on him and her father while they are talking about the book. Shekure sends Black a letter that is not truly representative of her feelings to begin the game of love.

Shekure is waiting for her husband, a soldier missing for four years. After Elegant's murder, she realizes that she must get a divorce from her missing husband and remarry before her father dies. The three suitors are Black, her brother-in-law, Hasan, and one of the miniaturists. Hasan threatens Shekure with legal action to return her to the home he shared with his brother and her, which Shekure left to escape Hasan's cruelty and inappropriate advances.

At the coffeehouse, a favorite hangout for the workshop artists, a storyteller uses drawings and a few details from Olive, Stork and Butterfly to tell tales based on the drawings in Enishte's book. These stories make fun of the book and create tension with a fanatical religious group led by Nusret Hoja from Erzurumi.

When Enishte is murdered, Shekure hides his death and instructs Black on obtaining a divorce for her. Black and Shekure marry later that day, and bury Enishte the next. Shekure does not allow Black full marital rights until he finds the murderer, who they suspect is the same person who killed Elegant.

Master Osman, the Sultan's Head Illuminator, gets involved in the murder investigation, but stops looking for clues and treats the opportunity to examine old books in the Sultan's Treasury as a feast for the eyes. Black tries to keep him on task. Master Osman feels betrayed by his artists and pierces a needle in his eyes to blind himself. Black leaves the Treasury to finish the murder investigation himself before Master Osman turns them all over to the torturer, and so he can go home to Shekure. In the meantime, fearful of the murderer, Shekure has gone to Hasan's home because she has nowhere else to go while waiting for Black. Leaving Hasan's home poses a problem, but Shekure manages with Black and Esther's help. Not wanting to leave their uncle's home, Shekure's sons take Hasan's ruby-handled dagger, which Black keeps.

Black confronts the murderer with the help of the other two artists. The murderer wounds Black with Hasan's dagger and escapes with all his belongings and the dagger. Before leaving town, Olive makes one more trip to the workshop, where Hasan sees the dagger. Assuming the murderer has helped to "steal" Shekure from his home, he beheads the murderer as revenge for losing Shekure and flees the city himself to avoid his consequences.

Shekure cleans Black's wounds and completes her attachment to him. When Olive's beheaded body is found with the incriminating illustrations, the workshop is absolved of the crimes, but the artistry is never the same. Black and Shekure have a long, happy marriage, although Black himself is never truly happy. In time, the sultans take a more traditional religious view toward art and forsake paintings and illustrations.

My Name Is Red from BookRags. (c)2022 BookRags, Inc. All rights reserved.