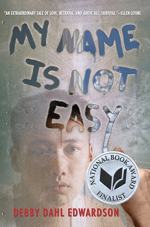 Plot Summary
+Chapters Summary and Analysis
Part I: The Day the Earth Turned Over (1960-1961); My Name Is Not Easy/Luke; Looking for a Tree/Chickie; Never Cry/Luke; Indian Country/Sonny and Chickie
How Hunters Survive/Luke; Snowbird/Chickie; Kickball/Sonny; The Size of Things Back Home/Luke, Sonny and Chickie
Part II: The Day the Soldiers Came (1961-1962); Rose Hips and Chamomile/Donna; Burnt Offerings/Luke; Military Trash/Chickie; The Day the Soldiers Came/Luke; The Meanest Heathens/Sonny and Amiq
Part III: When the time Comes (1962-1963); Coupons and Bomb Shelters/Chickie; Our Uncle's Gun/Luke; Eskimo Kiss/Chickie; Forever/Luke
Part IV: The Earth Can't Shake Us (1963-1964); He's My Brother/Chickie; Eskimo Rodeo/Luke; Unchained Melody/Donna; A Weak Spot or A Secret Strength/Luke
Our Story; Civil Disobedience; Good Friday
Epilogue: A New Gun/Luke
Free Quiz
Characters
Symbols and Symbolism
Settings
Themes and Motifs
Styles
Quotes
Order our My Name Is Not Easy Study Guide

My Name Is Not Easy Summary & Study Guide

Debby Dahl Edwardson
This Study Guide consists of approximately 33 pages of chapter summaries, quotes, character analysis, themes, and more - everything you need to sharpen your knowledge of My Name Is Not Easy.

My Name Is Not Easy Summary & Study Guide Description

My Name Is Not Easy Summary & Study Guide includes comprehensive information and analysis to help you understand the book. This study guide contains the following sections:

This detailed literature summary also contains Quotes and a Free Quiz on My Name Is Not Easy by Debby Dahl Edwardson.

My Name Is Not Easy is the story of Eskimo, Indian and White children who are sent to attend a Catholic boarding school in the early 1960s because there are no schools in their villages. The main character, an 11-year-old boy knows that his name will be changed to Luke because the priests and nuns at the school won't be able to pronounce his Inupiaq Eskimo name. Luke and his younger brothers, Bunna and Isaac, are punished for speaking their native language and soon Isaac is sent away with no warning or parental permission to live with a good Catholic family. The school is attended by white and Indian children too and there is much animosity between the groups of students. Eventually, as the students learn more about each other and bond in their distaste for they way they are treated by the priests and nuns, they begin to form a family of sorts. The death of one of the brothers along with other rites of passage for the kids forces them to grow up early and they learn quickly what is really important in life.

More summaries and resources for teaching or studying My Name Is Not Easy.

My Name Is Not Easy from BookRags. (c)2022 BookRags, Inc. All rights reserved.