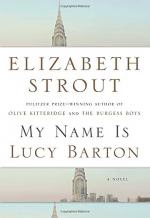 Elizabeth Strout
This Study Guide consists of approximately 47 pages of chapter summaries, quotes, character analysis, themes, and more - everything you need to sharpen your knowledge of My Name Is Lucy Barton.

My Name Is Lucy Barton Summary & Study Guide includes comprehensive information and analysis to help you understand the book. This study guide contains the following sections:

This detailed literature summary also contains Quotes and a Free Quiz on My Name Is Lucy Barton by Elizabeth Strout.

My Name Is Lucy Barton, by Elizabeth Strout, is written as a fictional memoir of a famous author. The story is told in a series of flashbacks, beginning with Lucy's time in the hospital when she was younger. The time is the early 1980s.

Lucy recalls that her earliest memories of her parents are accompanied by a feeling of loneliness. She remembers that when her parents would go to work, and she was still too young to go to school, they would take her with them, and lock her in the cab of the truck until they were done for the day. She says that those times alone devastated her, and instilled in her the idea that she was a burden.

While in the hospital, many years later, when she, herself, was a wife and a mother, her own mother visited her, which was monumental, because her mother and father lived in impoverished conditions in a rural part of Illinois. Her mother hated hospitals, but had come nonetheless, which spoke volumes to Lucy.

Her mother, at first, just made small talk. They discussed one of the women that Lucy's mother did alterations for, a Ms. Kathie. Ms. Kathie, though she was very well off, had left her husband for another man, only to find out that the other man was gay. When she thought to come back to her husband, he wouldn't have her, and both of them remained alone and sad the rest of their lives.

Lucy recalls her third grade teacher, Mr. Hanley, who had such a monumental impact on her life, though she doubts that he ever realized it. Out on the playground some of the girls had teased her about being poor. Mr. Hanley gave a stern lecture about prejudice once everyone was back inside. Later, he pointed out that prejudice happens in many ways and in many forms. It is this lesson that Lucy internalized and carried with her, as well as the fact that someone cared enough about her to stand up for her.

Lucy discusses the fact that her entire childhood was one of extreme poverty, sadness, and isolation. Because her home life was so dismal, she loved being at school. It was her refuge and she often opted to stay later than the others so that she could enjoy the warmth of the building, the food that was offered, and have access to the books. Whenever Lucy thinks about love, even in the present, she thinks of warmth, and to her loneliness is attributed the feeling of cold.

Back in the hospital, and another memory, the doctors came to take Lucy for a CAT scan. She was afraid that when she came back her mother would have left. However, her mother surprised her and stayed, sleeping by her side all night. When they both woke up in the morning, her mother's hand print was on her leg from where she held on to her all through the night. It was then, Lucy writes, that she knew that her mother cared. In her entire life, her mother has never, and never did, tell her directly that she loved her.

Lucy writes that when she met William, the father of her two daughters, that she'd believed he was the man that would remove the feelings of loneliness from her. And for a time this was true. However, as the years waned, and he shifted his attention to the children, she began feeling lonely again. They eventually divorced after the children were grown and were in college. William was never able to relate to Lucy's family or to understand how they all related to one another. He'd never experienced such poverty and couldn't identify with them. Lucy's second husband came from similar circumstances and as a result became the true love of her life.

Lucy talks about after leaving the hospital that she had gone to a bookstore where she'd run into a woman who had talked to her about writing and sharing her own truth, no matter what people thought. She later learned that this woman was Sarah Payne, a well known author who was speaking in the area. Lucy had read many of her books and found that she had even more respect for her after having met her in the store. Lucy decided that she wanted to be like Sarah and it started her on her path to becoming a published author.

Lucy talks about her friend Jeremy, an artist, who told her that in order to be a writer she would have to learn how to be ruthless. For many years, Lucy didn't understand what he meant by that. Later, after Jeremy died, she came to the understanding that Jeremy equated ruthless behavior with being able to be brave enough to put something of your true nature down on the page, which is what Lucy began to do.

At the end of the novel, Lucy tells about going to see her mother on her deathbed, of speaking with her father, and making peace with her childhood memories, even the painful ones. They were a part of her, and her parents had done the best they could with what they had to work with.

More summaries and resources for teaching or studying My Name Is Lucy Barton.

My Name Is Lucy Barton from BookRags. (c)2022 BookRags, Inc. All rights reserved.