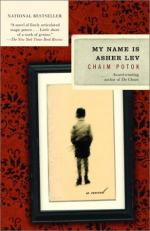 Chaim Potok
This Study Guide consists of approximately 38 pages of chapter summaries, quotes, character analysis, themes, and more - everything you need to sharpen your knowledge of My Name Is Asher Lev.

My Name Is Asher Lev Summary & Study Guide includes comprehensive information and analysis to help you understand the book. This study guide contains the following sections:

This detailed literature summary also contains Topics for Discussion on My Name Is Asher Lev by Chaim Potok.

“My Name is Asher Lev” is a novel by the late Chaim Potok, author of The Promise and The Chosen, and traces the life of Asher Lev, “the notorious and legendary Lev of the Brooklyn Crucifixion.”

The reader is immediately made aware that Asher is both notorious and an artist, but is quickly taken back in time to Asher’s childhood, and introduced to his committed parents. The novel explores the palpable fear Asher experiences when his grief-stricken mother, Rivkeh, is barely there for him, and the many small ways in which he attempts to understand the persecution of Jews in Russia during this period.

Asher discovers that he is a gifted artist, which is also a curse, because his orthodox Jewish father, Aryeh, believes that his artwork is nothing but “foolishness.” Aryeh is an emissary for the Rebbe, the leader of the Ladover Hasidic community. During his earlier years and throughout his mother’s illness, Asher spends a lot of his time at his father’s office, where he is fascinated by the work his father does on behalf of persecuted Jews. He also meets and befriends Yudel Krinsky, a recent immigrant from Russia who was saved by Aryeh.

The Rebbe asks Aryeh to move to Vienna, Austria, so he can better serve Ladover Jews in Europe. Asher does not want to move to Vienna, and asks if he can live with his Uncle Yitzchok. Over the next year, Asher seems sad and his parents worry about him. He turns to his art, not only for solace but also to express himself, once drawing a frightening picture of the Rebbe in his holy book, only to be discovered by his teacher. The mashpia, the school’s adviser, has a talk with Asher, who breaks down. He also asks Asher to draw some pictures for him, which Asher leaves behind in a sketchbook. Eventually, Aryeh travels to Vienna alone, on the advice of the Rebbe.

Asher’s interest in art continues, and Rivkeh buys him oil paints. However, her son then neglects his schoolwork, which upsets his father. After visiting a museum, Asher begins to sketch crucifixions. Aryeh discovers these sketches on a visit home for Passover, and he is furious. When Aryeh returns to Europe, Asher works on improving his schoolwork. Rivkeh joins Aryeh in Europe for the summer while Asher stays with his Uncle Yitzchok.

Asher meets with the Rebbe before his Bar Mitzvah. Jacob Kahn, an artist, has also been called to the Rebbe's office, and he introduces himself to Asher as they both leave. The Rebbe has asked Kahn to mentor Asher as an artist. At their first meeting at Kahn’s studio, Kahn introduces Asher to Anna Schaeffer, a gallery owner. He tries to scare Asher out of becoming an artist, knowing how difficult this will be for an orthodox Jew. During his first year with Kahn, Asher visits museums, see paintings of crucifixions, and even learns how to paint from a live nude model. Rivkeh decides to move to Vienna without her son, as he refuses to move there. After meeting with the Rebbe, Asher seems to have his blessing as an artist. He moves in with his Uncle Yitzchok, who eventually renovates his attic into a bedroom/studio for Asher.

Asher spends the next several summers with Jacob Kahn at his beach house in Provincetown, Mass. Asher loves spending time there, where he and his mentor paint, take walks on the beach, and where Asher learns to swim. Asher and Kahn also travel to exhibitions together. Asher is pressured by his family to visit Vienna for a summer, but on the way there, he falls ill. He returns immediately, after which Anna Schaeffer, the gallery owner, mounts Asher’s first art show.

While Asher is in college, his parents return home, as Aryeh’s work overseas is now done. Asher moves back in with his parents, but Aryeh and Asher still don’t get along. His parents, disappointed that there will be nude paintings in his next show, do not attend.

Asher decides to go to Europe to study art; he visits Florence first, where he studies Michelangelo's Pietà, and then his David. Asher then travels to both Rome and Paris, eventually renting an apartment in Paris, where he can paint. In Paris, Asher thinks back on his life, his community, and his family. He remembers the anguish his mother went through when he was younger, always worrying about him and his father. Asher creates two paintings that symbolically show his mother in a crucifixion.

The two paintings are displayed at a show in New York, which his parents attend. They are shocked by the paintings, as are many other former supporters from his Ladover community. Asher’s parents cannot forgive him, friends turn their backs on him, and the Rebbe asks him to leave Brooklyn. He moves back to Paris.

More summaries and resources for teaching or studying My Name Is Asher Lev.

My Name Is Asher Lev from BookRags. (c)2022 BookRags, Inc. All rights reserved.