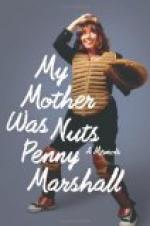 My Mother Was Nuts Summary & Study Guide includes comprehensive information and analysis to help you understand the book. This study guide contains the following sections:

This detailed literature summary also contains Topics for Discussion on My Mother Was Nuts by Penny Marshall.

My Mother Was Nuts, a memoir by Penny Marshall, tells the story of the comedienne's life and career from her beginnings in New York City all the way to fame and fortune in Hollywood. Penny Marshall was born in the Bronx, New York. She was the youngest of the three children of Tony and Marjorie Marshall. Marjorie was quite content with two children, Garry and Ronny, and was hoping for a miscarriage when she found out she was pregnant with Penny. Later, she told her youngest child that she hadn't really wanted her but she had stubbornly hung on.

Penny's mother was modern before her time. She had no interest in staying home and being the "little homemaker." She wanted to pursue her own career. Marjorie opened the Marjorie Marshall Dance School where she was the chief instructor and choreographer. Of her 360 students, only one was not a big fan and that, unfortunately, was her younger daughter. Tony had his own ambitions. He wanted to be a mogul on Madison Avenue. He eventually opened the Marshall Organization in Manhattan and enjoyed a respectable level of success. Tony's real last name was Masciarelli but he changed it to Marshall so that his ethnicity wouldn't hold him back. He never again told anyone that he was Italian or Catholic.

Starting from her position as an unwanted accident, Penny and her mother had an up and down relationship. One thing that Penny always admired about her mother was her sense of humor, something that she obviously inherited from her. Marjorie liked to entertain and lived vicariously through her young students when they performed - and they performed everywhere - at shipyards, prisons, benefits and even under the bright lights of TV studios. Although Penny wasn't a dancer, she surely got her taste of entertaining from those early days at her mother's shows. Penny never thought of herself as a girl who would do well in Hollywood. She never thought she was pretty or appealing which might have stemmed at least somewhat from the ridicule inflicted upon her from her own mother. For example, she would tell Penny she could open up a Coke with her buck teeth!

But with a "what doesn't kill you makes you stronger" approach to life, Penny somehow managed to become an assertive risk-taker who knew she wouldn't be happy with an ordinary life. Her intelligence certainly helped her along in life. In school, she was always in the same room with the smart kids - funny that she thought that the other kids were the smart ones! In school, Penny excelled unless it came to a choice between books and boys. She would always choose the latter.

Penny found a new life in Albuquerque, New Mexico, when she entered the University of Albuquerque. She was most interested in partying and boys and in her third year learned that she was pregnant. She entered into an ill-advised marriage that didn't last very long but she got a beautiful daughter out of that mistake. Hollywood was calling and with her big brother, Garry Marshall, already having success as a screenwriter, she had someone to help her with a budding career. She didn't know what she wanted to do and kind of drifted about for a while in bit parts in movies and TV. During that time she met and married a son of Hollywood royalty, Ron Reiner. Penny's comedic skills finally came to the notice of directors and producers and after a few years of a directionless existence, she landed one of the starring roles in the hugely successful TV series, "Laverne & Shirley." Her career was going great but her marriage faltered when her successes began to eclipse those of her husband.

Penny left TV land behind for the big screen. Her first huge hit was "Big" which had box office receipts in excess of $100 million - a first for any female director. She won great critical acclaim and box office success in other films such as "Awakenings" and "In a League of Their Own."

Penny Marshall had to fight sexism in Hollywood and the industry's bias against women with less than perfect looks. However, her biggest battle was when she fell sick and learned the jarring news that she had brain and lung cancer. But just as her mother told her many years before, even though she probably wasn't supposed to survive, Penny Marshall stubbornly hung on!