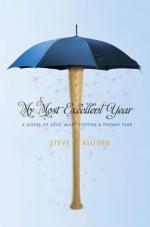 My Most Excellent Year: A Novel of Love, Mary Poppins, and Fenway Park Quotes

Steve Kluger
This Study Guide consists of approximately 20 pages of chapter summaries, quotes, character analysis, themes, and more - everything you need to sharpen your knowledge of My Most Excellent Year.

"Pop says he knew you were already falling in love with him after the first two hours because you held onto his arm when Bucky F. Dent hit the home run" (Chapter 4, p. 23).

"At least once a week, try to make a mistake. And on the off-chance you discover that the world hasn't exploded, make another one" (Chapter 7, p. 72).

"And when he reached the finish, the ovation began while he was still delivering "knowing that here on earth God's work must truly be our own." That's when he turned toward the downstage wing, stared directly into my eyes, and ended on a shrug and a sheepish grin that was pure Anthony" (Chapter 10, p. 133-134).

"Ale's thrown me a breaking curve that I don't know how to handle. The more time...

More summaries and resources for teaching or studying My Most Excellent Year: A Novel of Love, Mary Poppins, and Fenway Park.

My Most Excellent Year: A Novel of Love, Mary Poppins, and Fenway Park from BookRags. (c)2021 BookRags, Inc. All rights reserved.