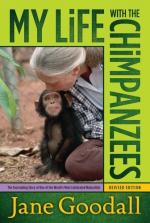 My Life with the Chimpanzees Summary & Study Guide

Jane Goodall
This Study Guide consists of approximately 20 pages of chapter summaries, quotes, character analysis, themes, and more - everything you need to sharpen your knowledge of My Life with the Chimpanzees.

My Life with the Chimpanzees Summary & Study Guide Description

My Life with the Chimpanzees Summary & Study Guide includes comprehensive information and analysis to help you understand the book. This study guide contains the following sections:

This detailed literature summary also contains Topics for Discussion and a Free Quiz on My Life with the Chimpanzees by Jane Goodall.

My Life with the Chimpanzees is a book for young adults that tells the story of Jane Goodall's rise to become one of the world's great ethologists and the world's expert on chimpanzee behavior in the wild. Goodall is still known across the world as the first scientist who studied chimpanzees in their natural habitat and has won many awards for her work. She has also produced a large number of books and a larger number of documentaries that have been seen all over the world. The pages of My Life with The Chimpanzees make the legend of Jane Goodall a more concrete reality. One of the points of the book is to make Goodall's work accessible to children and young adults that have similar interests in the animal world.

My Life with the Chimpanzees has nine short chapters. Chapter 1 introduces Goodall to the reader but focuses mostly on the study of ethology, explaining to her reader what her field is all about and how it was founded and developed. Goodall explains that animal behavior may be studied and that ethologists are those who study that behavior. She also describes her occupation. She spends about a third of the year in Gombe National Park in Tanzania, Africa and has been doing so since 1960 with her field staff.

The next seven chapters describe how Goodall rose to this position. Early on, Goodall was fascinated by animals, though she was not as focused on chimpanzees until later in life. Goodall was born in England just before World War II and grew up in the post-war period. When she was an adolescent she decided that she would study animals in Africa and after college she was able to visit Africa for three weeks with a friend. While she was in Africa, she had the opportunity to meet the great paleontologist Louis Leakey, who became her adviser and teacher. He would later secure funding for her early research. Goodall explains that it was initially physically and socially difficult to live in Africa at first but her first few weeks gave her enough excitement observing chimpanzees to keep going.

As the book progresses, the reader is introduced to a number of chimpanzees, including the first chimp Goodall met, David Greybeard, and the female-alpha she observed for years, Old Flo. Flo's children, among them Figan, Fifi and Flint, are all discussed in the book as well. Goodall focuses on their unique personalities and explains the social structure of the chimpanzee troop that they were members of. Goodall sometimes discusses her personal life, such as her first marriage to a documentary filmmaker, Hugo van Lawick and the birth and youth of their son, Hugo Eric Louis or "Grub." After Hugo and Goodall divorced, Goodall married again this time to Derek Bryceson, the director of Tanzania National Park, who was partially paralyzed and died soon afterwards.

Despites some tragedies in her life, Goodall judges herself to be happy. She encourages the reader to pursue the study of animals, if he is so inclined. Even if he is not interested, Goodall suggests ways in which the reader can help protect animals in his local community.

More summaries and resources for teaching or studying My Life with the Chimpanzees.

My Life with the Chimpanzees from BookRags. (c)2022 BookRags, Inc. All rights reserved.