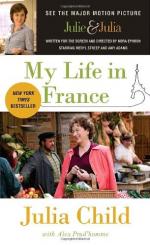 Julia Child
This Study Guide consists of approximately 33 pages of chapter summaries, quotes, character analysis, themes, and more - everything you need to sharpen your knowledge of My Life in France.

My Life in France Summary & Study Guide includes comprehensive information and analysis to help you understand the book. This study guide contains the following sections:

This detailed literature summary also contains Topics for Discussion and a Free Quiz on My Life in France by Julia Child.

My Life in France by Julia Child examines Julia's life in France and her connection to French food. Using Julia's own words, the book gives brief narratives of her experiences in France, learning how to cook, writing her cookbooks, and beginning her television program. Not a complete biography, My Life in France focuses on the events, people, experiences, and lessons that influenced Julia and that she felt were important to her life.

Julia and her husband Paul arrived in France in 1948. At the time, Julia didn't know how to speak French or much of anything about cooking. Yet, from her first moments on French soil, Julia felt a connection with the people and food of the country. She'd soon start language lessons, and she began exploring the markets in Paris. She enrolled in the famous Cordon Bleu to learn more about French cooking. After learning all she could from Chef Max Bugnard, Julia earned her certificate from the prestigious school.

Julia's time in Paris is also marked by her introduction to Simone Beck and Louisette Bertholle. The three women shared a love of cooking. They formed a cooking school for Americans, giving lessons in Julia's kitchen. She also joined them in their efforts to produce a French cooking book for an American audience. Julia spent years working on the book, testing recipes, experimenting with ingredients, editing the recipes for American kitchens, and negotiating the personalities of her friends. She threw herself into the project wholeheartedly and finally saw it published after several initial rejections.

Between Julia's first efforts at cooking to her later television show, she and Paul would live in Paris, Marseille, Germany, Norway, and the United States. They moved from place to place because of Paul's career, until he retired and they moved back to Cambridge, Massachusetts. Throughout their moves, Julia worked on the cookbook with Simca, sending letters back and forth. She also experimented with cooking and food in each place that the couple lived.

Julia continued to teach others about cooking and food after the publication of Mastering the Art of French Cooking. She and Simca wrote a second volume of the book and Julia worked on her own cookbooks when they finished collaborating. She also brought one of the first successful cooking television shows to an American audience. The French Chef made Julia a celebrity and helped teach millions of people the basics of cooking and French food.

In addition to a discussion of Julia's introduction to and growth in the culinary area, My Life in France gives private insight into Julia's relationships with her husband, father, friends, and colleagues. Her larger than life personality fills the pages as the reader watches her grow as a person. Julia allows the reader to see her friendship and love for Paul, her differences with her father, her arguments with Simca, and her respect for the French people around her.

More summaries and resources for teaching or studying My Life in France.

My Life in France from BookRags. (c)2022 BookRags, Inc. All rights reserved.