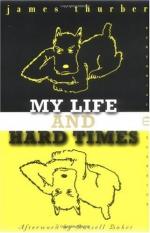 Plot Summary
+Chapters Summary and Analysis
Chapter 1, The Night the Bed Fell
Chapter 2, The Car We Had to Push
Chapter 3, The Day the Dam Broke
Chapter 4, The Night the Ghost Got In
Chapter 5, More Alarms at Night
Chapter 6, A Sequence of Servants
Chapter 7, The Dog that Bit People
Chapter 8, University Days
Chapter 9 Draft Board Nights
A Note at the End
Free Quiz
Characters
Objects/Places
Themes
Style
Quotes
Topics for Discussion
Order our My Life and Hard Times Study Guide

James Thurber
This Study Guide consists of approximately 29 pages of chapter summaries, quotes, character analysis, themes, and more - everything you need to sharpen your knowledge of My Life and Hard Times.

My Life and Hard Times Summary & Study Guide includes comprehensive information and analysis to help you understand the book. This study guide contains the following sections:

This detailed literature summary also contains Topics for Discussion and a Free Quiz on My Life and Hard Times by James Thurber.

In My Life and Hard Times, humorist James Thurber looks back fifteen years to relate nine stories that illustrate the oddball family conditions in which he grows up in the era of World War I.

James Thurber's My Life and Hard Times consists of nine vignettes that stand out in the memory of his youth. They center around a grandfather whose mind and temper flash back to fighting in the American Civil War, a jittery mother and father somewhat at odds over the state of the household, a docile older brother Herman, a normally "quiet and self-contained" younger brother, Roy, who periodically feels the need to play pranks, and the author, whose weak eyes never miss the vivid details of life.

The inexplicable seems to happen to the Thurbers in the wee hours of the morning. In "The Night the Bed Fell," Mother fears that Father will be killed in the heavy attic bed, and when she hears James' cot collapse, assumes that it has happened. In "The Car We Had to Push," the family's odd views about cars and electricity are examined, Roy plays a prank while driving, the badly-parked family car is mangled by a passing street car, and Grandfather has to be calmed about an overlooked funeral.

In "The Day the Dam Broke," the whole East side of Columbus, OH, is caught up in a panic over the bursting of the dam. It turns out to be a false rumor but demonstrates how mass hysteria works. The Thurbers, of course, are in the thick of things. "The Night the Ghost Got In" returns home, late at night, as suspicious sounds downstairs lead to a police invasion to capture burglars and Grandfather's wounding one officer with his own gun. In "More Alarms at Night," Roy plays another prank on Father and James wakes Father for help remembering the town Perth Amboy.

"A Sequence of Servants" recalls the zaniest of the incredible string of domestic servants that come through the Thurber home, while "The Dog That Bit People" recalls Muggs, their antisocial pet. In "University Days," Thurber describes his mediocre career at Ohio State University, and in "Draft Board Nights" describes how, after being rejected for poor vision, he is repeatedly recalled for physical examinations. The last time comes on comes Armistice Day.

More summaries and resources for teaching or studying My Life and Hard Times.

My Life and Hard Times from BookRags. (c)2022 BookRags, Inc. All rights reserved.