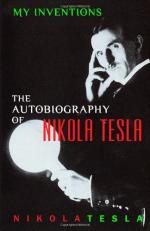 Plot Summary
+Chapters Summary and Analysis
My Early Life
My First Efforts in Invention
My Later Endeavors
The Discovery of the Tesla Coil and Transformer
The Magnifying Transmitter
The Art of Teleautomatics
Free Quiz
Characters
Objects/Places
Themes
Style
Quotes
Topics for Discussion
Order our My Inventions: The Autobiography of Nikola Tesla Study Guide

My Inventions: The Autobiography of Nikola Tesla Summary & Study Guide

Nikola Tesla
This Study Guide consists of approximately 22 pages of chapter summaries, quotes, character analysis, themes, and more - everything you need to sharpen your knowledge of My Inventions.

My Inventions: The Autobiography of Nikola Tesla Summary & Study Guide includes comprehensive information and analysis to help you understand the book. This study guide contains the following sections:

This detailed literature summary also contains Topics for Discussion and a Free Quiz on My Inventions: The Autobiography of Nikola Tesla by Nikola Tesla.

"My Inventions: The Autobiography of Nikola Tesla" is a brief account in Tesla's own words of his early life and education and his career as an important and prolific inventor in the late nineteenth and early twentieth centuries.

"My Inventions" is an assemblage of six magazine articles Tesla is asked to provide to the periodical "Electrical Engineering." Originally published in 1919, each article focuses on a certain period of Tesla's life, beginning with his early childhood in Croatia and spanning his education in Gospic and Prague, the beginning of his career in Budapest and Paris, and his moving to New York to work for Thomas Edison before founding a successful laboratory of his own.

Aimed at a readership with a particular interest in electrical engineering, Tesla's articles focus on two of his best known inventions, the induction motor and the oscillating transformer, also called the Tesla coil. He describes his development of the concepts for these devices and explains the theory behind them with the use of illustrative diagrams.

Tesla devotes a good portion of his work to explaining a recent project of his that involves transmitting power through the air. He envisions a worldwide network of transmitting towers that will allow for the transmission of information around the globe as well as make possible the remote control of electrical devices from anyplace on the planet. Tesla is optimistic that his "World Wireless System," as he calls it, will someday be built and recognized as a revolutionary advance.

Throughout the articles, Tesla expounds on his unique theory of mind which holds that human thoughts and actions are all responses to some kind of external stimulus. He comes to this conclusion based on his own unusual experiences from an early age where he frequently has vivid hallucinations where he sees scenes from his own memory played out again before his eyes. He realizes they are always triggered by certain things, and devotes much of his thought to identifying the causes of these visions. From his own experience, he begins to think of humans as a kind of extremely complex automaton and from this premise theorizes that it is possible to build machines that might approximate independent behavior and judgment.

Tesla is writing at the end of the First World War, and in his concluding article he muses over the role his technological discoveries might play in the establishment of a peaceful world. He proposes that his latest inventions that have the potential to control devices from remote distances might be used in the future to elevate warfare to even more horrific levels. Or, he suggests, his inventions might be used instead to create a worldwide network of shared information and culture that will bring the world closer together, eliminating the root cause of war.

More summaries and resources for teaching or studying My Inventions: The Autobiography of Nikola Tesla.

My Inventions: The Autobiography of Nikola Tesla from BookRags. (c)2022 BookRags, Inc. All rights reserved.