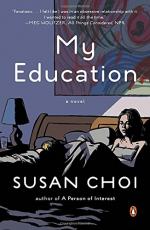 Choi, Susan
This Study Guide consists of approximately 57 pages of chapter summaries, quotes, character analysis, themes, and more - everything you need to sharpen your knowledge of My Education.

The year 1992 is the first of the book's noteworthy settings, the beginning of a decade of relative economic prosperity, relative intellectual and scientific progress, and significant movement in terms of human rights. It was pre-cell phones and Facebook, very early internet, and pre-9/11. It was a time of relative sexual freedom (AIDS had not fully erupted into the health system) and emotional exploration. Later in the 90's, there were several significant upheavals, but the early 90's were, in a lot of ways, a good time to start learning, as Regina does, how to be a grownup. It could be argued that as the 90's progressed and turned into the early 2000's, the world itself grew up, and in some not too pleasant ways.

The university that Regina attends (at least for a couple of semesters) is located in a relatively small city, large enough to have...

More summaries and resources for teaching or studying My Education.

My Education from BookRags. (c)2022 BookRags, Inc. All rights reserved.