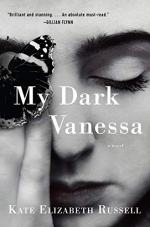 Kate Elizabeth Russell
This Study Guide consists of approximately 70 pages of chapter summaries, quotes, character analysis, themes, and more - everything you need to sharpen your knowledge of My Dark Vanessa.

This detailed literature summary also contains Quotes and a Free Quiz on My Dark Vanessa by Kate Elizabeth Russell.

The following version of this book was used to create the guide: Russell, Kate Elizabeth. My Dark Vanessa. Morrow, 2019.

Russell’s novel moves between present and past. The novel is divided into seventeen chapters, each defined by years in Vanessa Wye’s life before, during, and after her affair with her prep school English teacher. Nine of the chapters take place in 2017, the rest move forward from 2000, the year Vanessa arrives for her sophomore year at Browick Prep School. Wye serves as the first-person narrator.

The novel begins in 2017. Thirty-something Vanessa is a concierge at a posh resort hotel in Portland, Maine. The job is dead-end for a woman who, as a promising student decades earlier, once harbored dreams of being a great poet. Still reeling from the recent death of her father, she drifts through her days now, uncertain over her future, unwilling or unable to confront the ghosts of her past, specifically the trauma of an affair she had with an English teacher, Jacob Strane, that began when she in prep school. An email contact from a journalist asks Vanessa to come forward with her story about her experience with Strane. Strane, now approaching sixty, in the culture engendered by the #MeToo Movement faces a number of career-ending allegations from other students who were victimized by Strane. Years later, however, Vanessa is still not certain she is a victim of abuse. She believes Strane was her first, greatest (and only) love.

The affair, as Vanessa recounts it, began almost as a cliché. Vanessa is a social misfit, a hypersensitive nerdy Fiona Apple wannabe. The attraction between her and Strane begins almost the moment their eyes meet in his American literature honors seminar. Under the guise of offering to read her poetry and introducing her to works of literature the class would never read (most notably Nabokov’s Lolita), Strane makes her feel special, even gifted. The seduction of Vanessa is subtle, gradual until the two consummate their attraction in his home. It is at once fierce, gentle, and messy. It is Vanessa’s first time. And, in the state of Maine, it is a crime. Vanessa is only fifteen.

Over the next several months, even as the two become more careless in their assignations, rumors begin to swirl about the campus. Vanessa finds herself isolated from her peers. She is consumed by her love. In a culture defined by Monica Lewinsky, Laura Palmer, and Brittney Spears, however, Vanessa refuses to confront the possibility that she is a victim of a pedophile. She believes at fifteen she can make her own decisions. Her clandestine nights with Strane are grand passion, made grander, more passionate because they have to be kept secret. The rumors become too thick to avoid. When a list is presented to the administration of students who noticed inappropriate behavior, Strane is called in to explain himself. He panics. To help the man she believed she was in love with, Vanessa agrees to admit publicly she made up the entire story, that it was her fantasy. The school summarily expels her.

For the next several years, Vanessa maintains a relationship with Strane. Vanessa finds commitment to her education difficult. With the exception of a college literature professor who shows interest in her writing and encourages her to pursue graduate work (Vanessa is not entirely sure he is not interested in her sexually), Vanessa settles into a malaise. She turns increasingly to alcohol and weed and one-night stands to make bearable her sense of isolation from Strane. He haunts her memories. Only their infrequent emails, inevitably followed by intense lovemaking sessions, sustain her. She never considers the possibility that Strane was a monster, that she was victimized by a calculating pedophile who had taken advantage of her lack of worldly experience, her low self-esteem, and her naiveté about love and sexuality.

In her thirties, working at the hotel in Portland, she follows the tectonic cultural impact of the #MeToo movement but never considers her experience with Strane. Through Facebook contacts, she becomes aware of growing outrage at Browick over new allegations against Strane who is now approaching retirement. The charges from a number of female students over more than twenty years suggest a dark if too familiar pattern: a male teacher using his authority in the classroom to take advantage sexually of impressionable young girls. The email from the journalist interested in exposing the depth of the teacher’s behavior compels Vanessa to confront her past and how she has handled the trauma. She reconnects with Taylor Birch, a friend from Browick who was also a victim of Strane’s attentions. With her help and through conversations with her psychologist and her mother, Vanessa begins to glimpse the dimensions of her emotional damage. Strane reaches out to her, asking her help in clearing his name. Vanessa is uncertain what to do. Then Strane, disgraced and fearing prison, commits suicide.

His death hardly frees Vanessa. Nor does the article about Browick once it appears. Vanessa is not ready to let Strane go even after Taylor tells her that Strane himself masterminded Vanessa’s expulsion to save himself. Vanessa hopes it is not too late to recover herself, that there will come a time when she will no longer define herself by Strane’s influence. She knows she must move on. As the novel ends, Vanessa hesitatingly begins a new relationship she hopes might bring her fragile life the consolation of companionship—she goes to a rescue shelter and brings home an abused pit bull mix.

More summaries and resources for teaching or studying My Dark Vanessa.