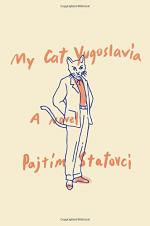 Pajtim Statovci
This Study Guide consists of approximately 36 pages of chapter summaries, quotes, character analysis, themes, and more - everything you need to sharpen your knowledge of My Cat Yugoslavia.

My Cat Yugoslavia: A Novel Summary & Study Guide includes comprehensive information and analysis to help you understand the book. This study guide contains the following sections:

This detailed literature summary also contains Quotes and a Free Quiz on My Cat Yugoslavia: A Novel by Pajtim Statovci.

The book begins with an online chat forum for gay hook-ups. Bekim narrates the prologue, in which he met with a handsome man, Ville, from the website. After they had sex, Bekim kicked him out.

Starting with the first chapter, the narrators begin to alternate between Bekim in the present and his mother in 1980. Bekim narrates the first untitled section of the chapter, and his mother, Emine, is the subject of the second section. Bekim bought a boa constrictor, and, in 1980, Emine met her future husband, Bajran.

In Chapter 2, Bekim went to university in Finland but was ostracized because he is an immigrant. In 1980, Bajran’s family agreed to pay for the wedding. In the present, Bekim reflected on his absent father. In 1980, Emine went to buy candy to treat herself for the wedding. In the present, Bekim met an alluring cat. In the past, Emine received a massive amount of expensive clothing as a gift from her fiancé, and screamed at her siblings to get away when they tried to look at her gifts.

In the past, Bajran and Emine had children, and then Bajran’s parents died, and he moved the family to Prishtina. When the political situation got bad, they moved to Finland. In the present, Bekim went to Yugoslavia and found a kitten. As a child, we learn in a flashback, he had a fear of cats and snakes, but his parents took him to a psychologist and then had an exorcism performed on him. In the past, Bajran got a job in Finland and then lost it, and then grew depressed when the war broke out in his homeland. In the present, Bekim went to his mother’s village with the cat and captured a deadly viper in a plastic bag.

In the present, Bekim and Sami moved in with one another and started fighting. Bekim lied to Sami and said that he had cheated on him, they broke up, and Bekim got depressed. In the past, Emine moved into an apartment and started working at a grocery store where she met a woman who gave her a kitten. In the present, Bekim and Sami got back together and Bekim killed his snake. Bekim told Sami that his father had committed suicide.

More summaries and resources for teaching or studying My Cat Yugoslavia: A Novel.

My Cat Yugoslavia: A Novel from BookRags. (c)2022 BookRags, Inc. All rights reserved.