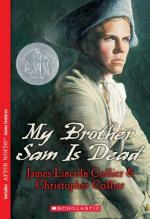 My Brother Sam Is Dead Overview

James Lincoln Collier
This Study Guide consists of approximately 55 pages of chapter summaries, quotes, character analysis, themes, and more - everything you need to sharpen your knowledge of My Brother Sam Is Dead.

My Brother Sam Is Dead Summary & Study Guide includes comprehensive information and analysis to help you understand the book. This study guide contains the following sections:

This detailed literature summary also contains Further Study and a Free Quiz on My Brother Sam Is Dead by James Lincoln Collier.

The Collier brothers have written a moving fictional account of the Revolutionary War's disruption of a small Connecticut village. America gained its independence at a great price. Students may think of all the colonists as patriots dedicated to liberation, but as My Brother Sam Is Dead makes clear, such was not the case. The revolutionaries met with great opposition from many loyal supporters of England, their mother country. The emotions that divided the emerging nation also caused internal dissent among family members whose loyalties differed. The Meeker family in My Brother Sam Is Dead illustrate the fact that war involves conflicts that lack clearcut divisions of territory or loyalty. The father, Life Meeker, remains loyal to England and the king, while his elder son, Sam, joins the fight for independence. Tim, the younger son who wishes to remain loyal to both, gets caught in the middle.

Families are torn apart, and young couples are separated as characters struggle with wide-ranging emotions and disparate political loyalties.

Most books for young adults about the American Revolution depict only a single point of view, usually that of the colonials who rebelled against the Crown and fought wholeheartedly for American independence. Christopher Collier thought it important to incorporate, in a single work, several different colonial outlooks on the war, and he persuaded his brother James to collaborate. To this end, the book portrays characters who belong to three major factions: the Whigs, simple, freedomloving farmers marching into confrontation to fulfill what they see as God's plan of liberty and equality; the Tories or Imperialists, loyal to the British from beginning to end; and the Progressives, who encourage rapid social change. The authors encourage readers to think, as each generation must, about the issue of war in both the past and the present.

Although the Colliers wrote My Brother Sam Is Dead as an antiwar statement, the book presents many viewpoints about the subject.

More summaries and resources for teaching or studying My Brother Sam Is Dead.

My Brother Sam Is Dead from BookRags. (c)2022 BookRags, Inc. All rights reserved.