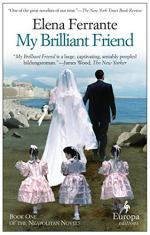 Elena Ferrante
This Study Guide consists of approximately 57 pages of chapter summaries, quotes, character analysis, themes, and more - everything you need to sharpen your knowledge of My Brilliant Friend.

This detailed literature summary also contains Quotes and a Free Quiz on My Brilliant Friend by Elena Ferrante.

"My Brilliant Friend" is a story of friendship—humbling, raw, human friendship—amid the backdrop of a poor section of postwar Naples, Italy.

The novel opens with a flashback: the narrator is Elena, a woman in her mid-60s, looking back on her six-decade friendship with Lila Cerullo. The girls meet at age six in their poor Naples neighborhood. They immediately bond over school and common hatred for the neighborhood ‘ogre,’ Don Achille.

As the girls grow older, they compete in all things. Elena was a good student, but Lila better. However, at the end of elementary school, Lila is unable to continue because her parents won’t pay for it, but Elena does. Lila’s father is a shoemaker, and Elena’s is a porter in a Naples hotel. Without Lila to compete with, she continues through school with success. At times she needs Lila’s help, and at times she is carried by her own intelligence and flair for writing.

The girls reach adolescence with all of the normal trappings: insecurities, varying levels of self-confidence, and crushes on the local boys. By age thirteen, Lila has developed into the beauty of the neighborhood. Elena, too, longs to be pretty and finds as many ways as she can to match Lila’s success.

The goal for both girls is to rise above their birth and leave 'the neighborhood,' the area where families have lived for generations and are at the whim of the Solara family. Lila, who is brilliant but cannot go to school, throws all of her energy into a way out: she and her brother Rino design and hand-make a pair of shoes that they hope to mass market and sell with the Cerullo name. The shoes become her focus and obsession for more than a year. All of her fierceness and intelligence is poured into the project. Meanwhile, Elena excels at school, with some help from Lila in Latin and Greek.

When Elena reaches the age for high school, she is promoted and encouraged to attend. When she has the upper hand, Lila has the lower, and vice versa. Elena is an honored student, and Lila is the prettiest girl around, the goal of most of the young men in the neighborhood. Elena fills her time with several empty relationships to try to keep pace with Lila’s string of admirers. Although her heart belongs to Nino Sarratore, the son of the local poet and rumored lecher, she settles for a few neighborhood boys that help her feel loved and wanted.

The girls turn fourteen, then fifteen, in this tumultuous period. Marcello Solara, the son of the new ‘ogre’ of the neighborhood, courts Lila ruthlessly with his money and power, and she resists him against her family’s will. Elena goes away for a summer to an island in the sea, becoming strong, confident, and beautiful. The Sarratores are there as well; Nino kisses her, and the beauty of the moment is lost when his father sexually assaults her.

Upon Elena’s return from the beach, she finds Lila fending off the interest of Stefano Caracci, the grocer, one of the wealthiest young men in the neighborhood, competition for the Solaras’ influence. She walks a tightrope between these two young men, finally throwing Marcello over and choosing Stefano, who agrees to invest in an expansion of her father’s shoe business.

During their engagement, Lila becomes even more beautiful because of Stefano’s wealth. The locals love and hate her with their envy. Elena is caught in the same trap, and is also trying to deal with own feelings of inadequacy and pressure to leave the neighborhood. The novel ends on a cliffhanger, at Lila’s and Stefano’s wedding. They are sixteen years old: Elena has two years left of high school, and is desperate to leave and elevate herself above the ‘plebs’ among whom she was born. Lila walks with feigned boldness into her marriage, finding at the last minute that her husband Stefano has sold out to the hated Solara family.

More summaries and resources for teaching or studying My Brilliant Friend.