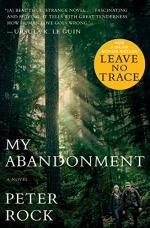 Peter Rock
This Study Guide consists of approximately 60 pages of chapter summaries, quotes, character analysis, themes, and more - everything you need to sharpen your knowledge of My Abandonment.

My Abandonment Summary & Study Guide includes comprehensive information and analysis to help you understand the book. This study guide contains the following sections:

This detailed literature summary also contains Quotes and a Free Quiz on My Abandonment by Peter Rock.

Caroline is a 13-year-old living in a forest outside Portland, Oregon, with the man she calls Father. They have few possessions, and their lives are nothing like those of most people, but Caroline is happy and healthy. Father teaches her, and she studies with the limited resources of a partial set of encyclopedias and a dictionary. Father has also taught her how to be careful in the forest so that she leaves no sign of her presence. He has instilled a strict moral code. Caroline has come to accept all these aspects of her life, but she does not really understand the consequences when she is seen by someone. A hiker finds their current camp, but Caroline is happy here and does not want to move. So, she does not tell Father. Officials arrive a few days later, arrest Father, and take Caroline to a juvenile facility. She answers the authority's questions, and they accept that she seems healthy and intelligent. She struggles to breathe in the confined facility and is relieved when she and Father are released, though with conditions.

Father is hired to work at a horse farm. He and Caroline have a small house stocked with food and clothes. Caroline settles into this life. She knows there will be some difficulties associated with attending a public school, but she imagines there will be good things, too. Father is certain they are being watched. One evening, he and Caroline pack a bag and set out from the farm. They briefly return to the forest. Knowing the authorities will search there for them, they settle into a life among the homeless in Portland, always careful not to be seen together. Father begins setting plans in motion to travel south. After a failed attempt to hop a train, they buy bus tickets. When Father sees Caroline talking to a woman on the bus, he fears that the woman will contact authorities. They get off the bus miles from the nearest town in the middle of a snowstorm. They make their way to Sisters, Oregon, where Father discovers his monthly military check has arrived at a post office box he set up ahead of time. The next night, they share a yurt with a woman and a young boy. Caroline can tell Father trusts them, though she does not. She and the boy play outside for awhile. Then, the woman leaves the yurt with many of Father's possessions. When Caroline goes inside, she discovers Father has been electrocuted.

She takes his body by sled to a cave and throws it down a shaft. As Caroline goes through his things for the first time, she is forced to face her past. She remembers four years earlier when she lived in Boise, Idaho, with her foster parents and her sister Della. She met a man new to the neighborhood. Everyone seemed to like him. One night, Caroline and Della were sleeping on the trampoline when the man arrived. He said he was Caroline's father, and she felt it must be true. He took her away to a camp in the woods, and she found she did not call out when she heard people calling her name. Father explained things to Caroline, including that she no longer had need of the name her foster parents called her. He said they were not bad people, but they simply did not understand the situation. He said they would return for Della some day, but they never did.

With Father dead, Caroline briefly travels to Boise and to see Della. When Della does not instinctively recognize Caroline, she realizes they are not meant to be together. Caroline returns to Sisters. There, she continues to cash Father's monthly check and settles into a life of her own making. She makes friends with a librarian who is not overly curious about Caroline's past, but who helps her a GED. Caroline begins working part time at the library, attending classes at a community college, and living on an estate as a caretaker. She lives in an eight-sided building and has devoted each wall to a time in her life as she writes about her past and settles into her present.

More summaries and resources for teaching or studying My Abandonment.

My Abandonment from BookRags. (c)2022 BookRags, Inc. All rights reserved.