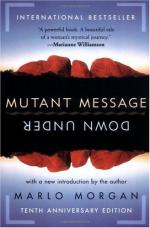 Marlo Morgan
This Study Guide consists of approximately 45 pages of chapter summaries, quotes, character analysis, themes, and more - everything you need to sharpen your knowledge of Mutant Message Down Under.

Mutant Message Down Under Summary & Study Guide includes comprehensive information and analysis to help you understand the book. This study guide contains the following sections:

This detailed literature summary also contains Topics for Discussion and a Free Quiz on Mutant Message Down Under by Marlo Morgan.

This book, subtitled "A Woman's Journey into Dreamtime Australia," tells the story of Marlo Morgan, a middle-aged, American woman and health care practitioner, who is taken on a physical and spiritual journey through the wilds of Australia. The book's narrative plays out a narrative and thematic pattern similar to those of many other quest narratives, exploring issues relating to humanity's relationship to nature, faith, and to itself.

The narrative begins with a terse, vivid description of how the author's journey starts - how she's picked up at an expensive Australian hotel, driven through intense heat and over rough roads into the Outback; how she's divested of her clothes and possessions, and how she's welcomed temporarily into a tribe of Aborigines who call themselves "The Real People." She is told that she is to be taken on a journey of discovery - of self, and of long forgotten, deeper truth.

The following chapters describe how the author arrived at the point of her journey's beginnings in leaving a successful life in America to pursue a childhood dream of visiting Australia. She became sensitive to the plight of urban aborigines and how worked to help a group of young Aborigines create successful lives and careers for themselves. It was this work, she is told, that led the more traditional aborigines, with whom she's traveling in the desert, to believe she was ready to at least begin the process of becoming enlightened.

As the author travels through the outback, she suffers a series of trials and setbacks that challenge both her physical and spiritual well being. At the same time, however, she also experiences moments in which she is made profoundly aware of the Aborigines' connection to the spiritual life beyond the physical. As the days of her journey lengthen into weeks and eventually into months, she becomes accustomed to eating what at first seems like strange food, communicating in what at first seem strange ways, and experiencing what at first seems like an uncomfortably intimate and trusting relationship with nature.

At one point in the journey, the author is given the opportunity to lead the tribe on its daily march. After an initial protest, she accepts the responsibility and leads the tribe further into the desert-like outback, where they walk for days without water or food. The author, frustrated with herself and close to despair, begins to hallucinate. She finally realizes she's being challenged to think and believe in the new ways she's being taught as opposed to the old ways she's known all her life. As she redirects her thought process, she becomes aware of a deep intuition that eventually leads both her and the tribe to food and water. Her success at adopting new ways of thinking and believing is celebrated, and she is led to the next level of initiation - a journey into one of the aborigines' most sacred spiritual sites.

During this phase of her journey, the author learns the meaning of her long-held desire/determination to visit Australia. She is told it was a desire to fulfill a destiny determined before she was born. Also at this time, the author is given a mission - to take the message of spiritual truth she has come to understand out to the world of "Mutants," i.e., citizens of Western society, who have evolved away from the experience of harmony with nature experienced by the Aborigines.

The Aborigines eventually return the author to civilization, where she struggles to fulfill her mission to teach the old ways to the people of the new world. She concludes her narrative with a declaration of her determination to reward the faith placed in her by the Aborigines with responsibility and faithfulness to their teachings.

More summaries and resources for teaching or studying Mutant Message Down Under.

Mutant Message Down Under from BookRags. (c)2022 BookRags, Inc. All rights reserved.