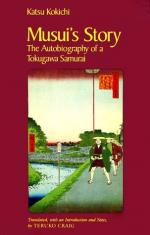 Plot Summary
+Chapters Summary and Analysis
Prologue
Childhood
I Run Away
Youth
I Run Away Again
Adult Years
Life After Retirement
Some Other Incidents, and Reflections on My Life
Free Quiz
Characters
Objects/Places
Themes
Style
Quotes
Topics for Discussion
Order our Musui's Story: The Autobiography of a Tokugawa Samurai Study Guide

Katsu Kokichi
This Study Guide consists of approximately 23 pages of chapter summaries, quotes, character analysis, themes, and more - everything you need to sharpen your knowledge of Musui's Story.

Musui's Story: The Autobiography of a Tokugawa Samurai Summary & Study Guide includes comprehensive information and analysis to help you understand the book. This study guide contains the following sections:

This detailed literature summary also contains Topics for Discussion and a Free Quiz on Musui's Story: The Autobiography of a Tokugawa Samurai by Katsu Kokichi.

Musui's Story is the autobiographical account of samurai Katsu Kokichi, who lived in the early 1800s during the height of the Tokugawa period in Japan. He took on the name Musui after he officially retired. Musui lived an adventurous life, full of swordfights, family squabbles, thievery, prostitution, and get-rich-quick schemes. Musui hopes that his story might help others, especially his ancestors, avoid the mistakes he made.

Musui is born to a concubine, given up to a wet nurse, and only at seven is he adopted into the Katsu family. He is a hellraiser in his youth, getting into fights and disobeying his father and his constantly scolding grandmother. He learns horseriding and swordfighting at an early age, and has no interest in reading and writing.

At fourteen, Musui runs away from home and spends several months begging at the side of roads and sleeping at various shrines or merely on the ground. Malnourished, Musui nearly dies from sickness until rescued by a priest. Musui then hits his testicles on a sharp rock while sleeping on a mountainside, and his testicles swell up so that he can hardly walk. After working on a fishing boat for a time, Musui returns home and spends the next two years bedridden because of his untreated testicle infection.

After recovering, Musui spends a couple years mastering fencing and becoming a local leader of swordfighters, arranging duels and bullying rival fencing schools. In order to keep up appearances, Musui becomes badly in debt, so much so that he decides to run away again to avoid financial problems. Masquerading as an important official, Musui spends time on the road until his family beseeches him to return home. To teach him a lesson, Musui's father literally imprisons him in a cage in his home for a period of three years, from age twenty-one to twenty-four.

Musui's adult years consist of a series of financial up and downs and other adventures. He spends a lot of time in Yoshiwara, the pleasure district, where he smokes, sees shows, and pays prostitutes for sex. He becomes a merchant of swords, earning profits only to spend every bit of it in short order. He also masquerades as a mystic, and gets rich (only to quickly lose it on prostitution) by peasants paying him to guess lottery numbers. He steals from the rice coffers of his brothers, and negotiates various disputes, usually involving money, with his landlord or troublesome peasants.

His bad reputation forces him into an early retirement at age thirty-seven. From then on, little changes for Musui as he continues to try to get rich and enjoy a lazy life and carnal pleasures. He starts to loan money to gamblers at interest. He also begrudgingly steps in to save his landlord from financial ruin by tricking the landlord's peasants into giving more money by threatening to commit suicide—something he has no intention of going through with. More recently, Musui has found it profitable to charge pleasure district merchants and brothels for "protection" much like the American Mafia of the mid-twentieth century.

Musui ends his story both acknowledging he lived a full and fun life, and regretting the harm he did to his family and his reputation, which undoubtedly led to poverty and a bad reputation.

More summaries and resources for teaching or studying Musui's Story: The Autobiography of a Tokugawa Samurai.

Musui's Story: The Autobiography of a Tokugawa Samurai from BookRags. (c)2022 BookRags, Inc. All rights reserved.